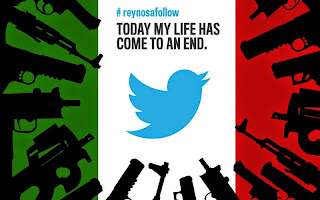 The Daily Beast is reporting that the Mexican cartel has murdered another blogger. She used a picture of Catwoman as her avatar and called herself Felina. Felina was an administrator for Valor por Tamaulipas (which means Courage for Tamaulipas), the most popular citizen news hub in the state, with more than 100,000 followers on Twitter and over half a million on Facebook.

Early in the morning on Thursday, Oct. 16, this message from Felina @Miut3 was posted: # reynosafollow FRIENDS AND FAMILY, MY REAL NAME IS MARÍA DEL ROSARIO FUENTES RUBIO. I AM A PHYSICIAN. TODAY MY LIFE HAS COME TO AN END. The next message, sent moments later, is supposedly her warning friends and family not to make the same mistake she did, using social media to report on organized crime, because “there is no point.” After she was kidnapped and killed cartel members posted pictures of her lifeless body on her Twitter account.

All I can say is do you not fear God? I blog about the Vancouver gang war but I don't mess with the Mexican cartel. They are ruthless. I find the brutality of the murders very disturbing. Someone there needs to spend some real time with Dr. Phil. There's a lot of Catholics in Mexico. I's hard to conceive how anyone can be so blasphemous towards God with such inhuman acts of brutality.

These are the same people that the ATF were supplying guns and selling drugs for in Operation Fast and Furious. The resignation of Eric Holder does not remove Obama's culpability in that criminal act. Nor does it circumvent his legal obligation to disclose the documents he has been hiding under executive privilege. He has been hiding criminal acts. That makes him culpable to the crimes he has been hiding. In the book The Unarmed Truth, whistle blower John Dodson stated Washington was very interested in that operation from day one.

Although I am shocked by the ruthless brutality of the Mexican cartel, my beef is not with them. What am I going to say about the cartel? They sell drugs? Everybody knows they sell drugs. My beef is with the Hells Angels because they sell drugs and lie about it. They support people like Larry Mizen who brutalized the homeless for years then all of a sudden cap him as soon as he gets some bad press when they know full well what his did all along. That is messed up.

Despite my concerns about the Mexican cartel's brutality, somehow I don' think they would be involved with the Pickton farm like the Hells Angels were. Somehow I don't think gang rape and what was done to Dianne Rock sits well with them. Or the Italian mafia for that matter. Tony Terezakis was Greek. Tony wasn't the only one. He just worked the door. The rat's nest is full of them. If you wear Hells Angels support gear, that is what you support. The gang rape and exploitation of Dianne Rock and all the many others.

Selling drugs in clubs to people who want it is none of my business. Giving crack to the homeless for free them beating the life out of them for payment is my business. What they did to Janice Shore is my business. If they cap me for saying that so be it. In time they will face a much worse consequence simply because life does not end at death. No lie can live forever. Mark my word.

The thought for the day and the gym today was "Courage is the ability to accept defeat without losing heart." Life does not end at death. Like Obi Wan Kenobi, Felina has become more powerful than her murders could ever imagine. The question I have is why are there so many missing people in her city? Killing Felina has only made that crusade go viral. Without getting into cartel business reporting all the people that go missing is something the other administrators for Valor of Tamaulipas can and should do. Peace.