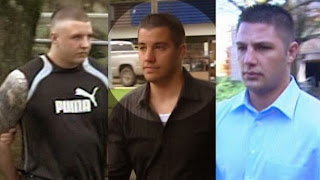 A blog reader recently referred to this and despite it's significance and relevance I had entirely missed it. The Abby news reported that on Dec. 31, 2008: Dennis Karbovanec survived a targeted shooting in Mission at an undisclosed location. He was wearing body armor at the time.

CBC reported that Five alleged members and associates of the United Nations gang have pleaded guilty in B.C. Supreme Court to conspiring to kill the worthless Bacon brothers in 2008 and 2009. However, the UN hasn't been charged in the 2008 shooting of DK in Mission. That's because Jamie Bacon has. I can't post a link to the media report confirming the charges because it contains things that are covered in ongoing publication bans.

I can confirm that Jamie Bacon has been charged with ordering the hit on Dennis Karbovanec on December 31st 2008. I'm not going to name the person accused of doing the shooting but I will name Jamie Bacon as the one accused of hiring him to shoot his own guy. This is somewhat profound because DK was a Bacon Brother associate. DK kind of took over Person Y's role as Jamie Bacon's body guard when Person Y was in jail.

Person Y testified in court that he cooperated in the Surrey Six investigation because he saw the loyalty among these thieves was a complete lie. This proves it. This is why so many hitmen for the Hells Angels flip. They keep getting betrayed by the people who hired them. Just like in the Vancouver Christmas of /95 hit.