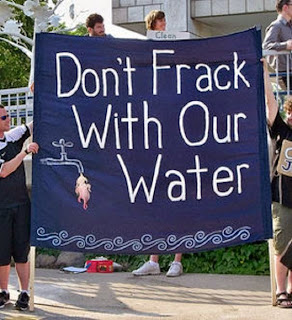 I realize there has been a huge ongoing campaign about fresh waters sales from Canada to the United States and to be quite frank, I never understood why. Water is a renewable resource. It evaporates and come back to us as rain. Now I realize why it is a concern. They are polluting massive amounts of water for fresh water fracking.

CBC is reporting that "the Western Canada Wilderness Committee and the Sierra Club filed a petition against the B.C. Oil and Gas Commission and energy company EnCana Corp. over the commission's decision to grant repeat short-term water approvals to the company. The environmental groups wanted the court to declare the approvals a violation of the provincial Water Act. They also asked a judge to quash several such permits issued to Encana. But in a decision posted this week on the court website, B.C. Supreme Court Justice Shelley Fitzpatrick dismissed the application."

Why was the application dismissed? "Days before the court hearing began, the provincial government introduced its updated Water Sustainability Act, which expressly allows recurrent short-term approvals. But the previous legislation did not prohibit such approvals." Christy Clark and the BC Liberals changed the law that they were breaking days before the trial. The Water Sustainability Act does the exact opposite of what it claims just like Harper's not about Crime bill does and just like the US Patriot Act does.

"Court heard that in 2012, the oil and gas commission granted the industry access to 20.4 million cubic metres of surface water. About seven million were for fracking — 54 per cent of that from short-term approvals." The judge lied and said only a small percentage of the water the US gets from Canada is being used in fresh water fracking. That is a lie. The US is using massive amounts of fresh water for fracking. Instead of using it for drinking or irrigation they use it for fracking. We give them water for drinking and irrigation so they can use theirs for fracking. It's that simple.

Recently Gwyn Morgan criticized New Brunswick and Nova Scotia's decision to join with Quebec to ban fracking because of the massive amounts of water it pollutes. Apparently they have banned liquid propane fracking as well as fresh water fracking. There is a huge difference between the two. Fresh water fracking involves putting massive amounts of toxic chemicals into the water to make fracking fluid which leaves toxic tailing ponds behind. Fracking with propane does not.