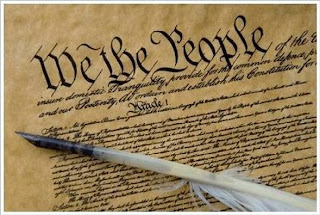 It doesn't matter whether or not they used the Soviet Criminal Act as a model when they drafted the US Patriot act. The fact is they are both very similar. Both are also very similar to the German Enabling Act which is yet another example of how two different roads lead to the same place.

I always find it strange how Fascists and Communists hate each other so much when in reality both extremes lead to the same destination: Dictatorship. The inherit problem with all three documents is the removal of civil liberty and the destruction of a free republic which is what the US Constitution was framed to preserve and protect.

The US Patriot Act is illegal because it violates the US Constitution which is the highest law of the land. The first and most important right that it removes is the right to due process. The right to have a lawyer, a fair and speedy trial, even the requirement of the State to charge you with an offense before they arrest you. If there is no charge they are not allowed to arrest you according to the law established in the US Constitution.

The US Patriot Act removes that crucial requirement. Susan Lindauer was an American citizen whose Constitutional rights were thrown out the window under the US Patriot Act. She also warns how under the act rights can be removed for environmentalists or any other group the State chooses violating the freedom of association as well as everything else the Constitution stands for.

She also explained how Gaddafi was an advocate for woman rights. Women were allowed to say no to a marriage proposal under Gaddafi's regime. They didn't have to wear the complete burka either. We helped the Islamic extremists over throw and murder Gaddafi. The same rag tag extremists we now claim are a more serious threat to world peace then Communist China. I beg to differ. These rag tag extremists are being used as a cover for removing civil liberty and throwing away the US Constitution and the Canadian Charter of Rights here at home.

In the US we saw two groups rise: the Occupy Wall Street movement and the Tea Party. I submit that both extremes had a common interest. Preserving and protecting civil liberty in the Constitution. Americans pledge allegiance to their flag as opposed to a politician. "I pledge allegiance to the Flag of the United States of America, and to the Republic for which it stands, one Nation under God, indivisible, with liberty and justice for all."

"And to the Republic for which it stands." The intent of the pledge of allegiance is to protect the free republic which is what the flag is supposed to represent. The US Patriot act is a violation of the pledge of allegiance. Elected officials in the United States take that pledge one step further. When they are sworn into office they swear an oath to defend the Constitution. Every politician that voted for the US Patriot Act broke their oath of office.

There's a new movement rising in the United States. They're called Oath Keepers. Police and military officials and supporters who are outraged at how the Constitution was violated during hurricane Katrina. They made an oath to protect the Constitution from all enemies both foreign and domestic and they intend on keeping that oath.

Thanksgiving has always been a time to stop and express gratitude for all the things we have to be grateful for - a job, a roof over our head, food on the table, the freedom and liberty we enjoy. Yet right now we are being robbed of that freedom and it isn't being taken by a handful of rag tag extremists, it is being taken by enemies in office who have burnt the flag and have broken their oath to defend the Constitution. This Thanksgiving is a call to arms. Oath Keepers arise. "Gentlemen may cry peace peace but there is no peace. The war is already begun."