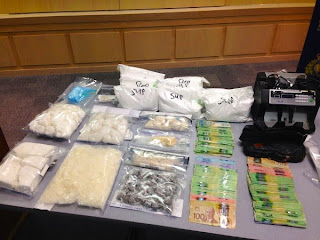 Castanet is reporting that on Oct 10, members of the Kelowna RCMP Street Enforcement Teams (SET) concluded a four week long drug trafficking investigation with the execution of simultaneous search warrants residences in the 200 block of Mills Road and the 1400 block of Crawford Road.

Only a trace amount of heroin, hash and ecstasy was found but Castanet is also reporting that on August 22nd police seized a kilo of cocaine and a kilo of crystal meth out of a vehicle in Kelowna. Two Kelowna men in their 30'a have been arrested and charged. I'm assuming it's the same two in the previous seizure. Names have not yet been released for some strange reason.