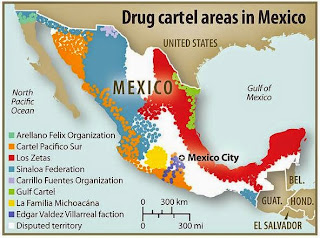 CNN is reporting that "Mexican federal authorities say they've captured Juarez Cartel leader Vicente Carrillo Fuentes." Although they claim he was one of Mexico's most wanted criminals they admit that the Juarez Cartel's influence had been waning after a lengthy battle for territory with the Sinaloa Cartel.

The Sinaloa Cartel is the one the CIA endorsed allowing the ATF to sell guns and bring back tons of cocaine from into the United States and likely Canada under Operation Fast and Furious. Basically we are announcing the capture of one of the CIA's drug dealing rivals.

Drtomoconnor.com is reporting that "the Juarez Cartel (led by Vicente Carrillo Fuentes and top lieutenant Juan Pablo Ledezma) has a long history, but the short of it is that they encroached on Columbian enclaves on the U.S. East Coast and were pretty good at maintaining alliances with other cartels, that is, until about 2004 when they started a deadly battle with the Sinaloa cartel for control of Ciudad Juarez. They mostly rely on a hit squad of contract killers and former police officers ("La Linea"), led by Jose Antonio Acosta Hernandez ("El Diego"), himself a former state police officer who was building an empire of his own up to his arrest in 2011."

I can't even find them listed on the cartel map but npr.org is reporting they held 5% of the market.