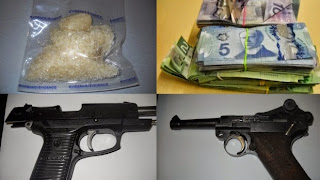 Victoria News is reporting that "Two men with Lower Mainland gang ties have been arrested by police on gun- and drug-related charges. Isaac Drennnan, 32, was arrested Oct. 9 at his Esquimalt home, where officers seized heroin, cocaine, methamphetamine and two handguns. Dustin Wadsworth, a 32-year-old associate of Drennan's, was also arrested with several ounces of cocaine on Oct. 22 at his 3500-block Turner Street home in Vancouver."

Again a Vancouver Island gang with ties to Vancouver but the gang is not named. The CFSU appears to be doing a great job but someone upstairs still seems to be running interference for the Hells Angles in the press. Sgt. Lindsay Houghton has taken over Pat Fogherty's job of spinning the truth away from the Hells Angels. Sadly it doesn't appear that they're just avoiding using the Hells Angles name in case of legal challenges. It looks like a premeditated spin away from them. Thus the previous 180 ways to say Hells Angels discourse.

Previously they would name the Vancouver Island gang. It was the Independent Soldiers. When I pointed out the Independent Soldiers work for the Hells Angels, they stopped naming the gang. Isaac Drennnan was under a lifetime firearm ban after being convicted of attempted murder for shooting two police officers in 2003. So what's the consequence for breaking a lifetime firearm ban? House arrest?

CTV is reporting that Drennan's associate Dustin Wadsworth was arrested in Vancouver for breaching bail conditions. He was found in possession of drugs and $58,000 cash. That's a fair chunk of change. This bust still points towards being Hells Angels associates. Heroin, cocaine and crystal meth. Remember that. How many times a day could they seize 178 grams of heroin from a drug dealer in front of Main and Hastings? Please advise.

Posted by Dennis Watson at 6:45 PM