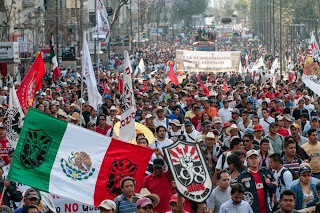 Speaking of organized crime in Mexico, the exploitation of the Mexican people is finally complete. Their newly elected "left wing" president just privatized their oil. After all that is what the war in Libya was all about. Gaddafi was good for woman's rights. We helped the religious extremists overthrow and murder Gaddafi so the oil companies could have his oil. Gaddafi was a socialist and their oil was nationalized. That was the real concern. Next to the fact that he wanted to buy a nuclear reactor from Argentina instead of Sarkozy. Although I am pretty right wing when it comes to crime and small business, I have no problem with nationalized oil and natural resources. I see it as a great way to lower taxes and balance the budget.

From 2000 until 2012 the President of Mexico had been a member of The National Action Party (Spanish: Partido Acción Nacional, PAN). Enrique Peña Nieto took office on 1 December 2012. He is a member of the Institutional Revolutionary Party (PRI)succeeding Felipe Calderón as president and thereby marking the return to power of the party that had ruled Mexican politics for 71 consecutive years. The previous PRI was Socialist leaning and supported Nationalized oil. The new PRI is caving in to US Corporate pressure and is privatizing Mexico's oil. Imagine that.

Consequently the privatization of Mexico's oil has sparked mass protests. Which isn't surprising since they were protesting the privatization of their oil before the new president was elected. What is surprising is the previously left wing party just privatized their oil. Surprise. The new left wing party is joining in the protests objecting to it.

This is another example of how the CIA screws up a country's democracy like they did in Cuba. By supporting the corupt Batista government they pushed the people to the other extreme which was even worse. Ironically the CIA created the Communist revolution in Cuba. I personally don't support that kind of extremism. Yet this is where the CIA's meddling takes us. Which forces me to question if that is not their real objective in the first place.

I realize that most of the Latino world tend to think Argentina is a big stuck up. However, I do think the song Don't Cry for me Argentina does apply to Felina, the blogger who was just murdered by the Mexican cartel. She was truly a people's hero. Peace. Nationalization of oil is good. Communism is not. Mind how you go. 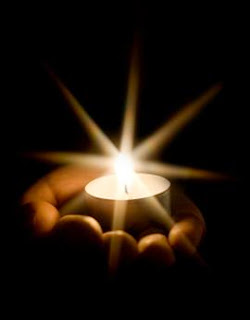