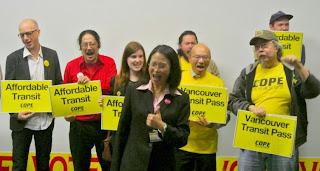 Speaking of the communist take over of Canada, take a look at Meena Wong's brainstorm. She's the COPE candidate for the mayor of Vancouver. The Vancouver Observer is reporting that she wants to implement a $30 a month Transit pass. She wants to force every citizen to buy one like they force every University student to buy one even if they live on campus. That my friend is communism. I don't ride the sky train. It sucks. I shouldn't be forced to buy something I don't use.

She also wants to introduce a $15 minimum wage. A nice idea but who's going to pay for it? The provincial government sets minimum wage not the city. She is overstepping jurisdiction and is just getting extreme. Larry Campbell was a good guy. Vancouver's own Da Vincci. COPE has never been able to get it together since him. I realize they are typically left leaning but these guys are a bit weird for my comfort zone.

In Vancouver I'm going to have to go with Kirk LaPointe and the NPA. They support business and oppose the toxic garbage incinerator. That is common sense. Ever Gregor Robertson and Vision Vancouver is becoming weird and extreme. Looks like we've come full circle.

Here in Surrey Barinder Rasode, the one that shafted the entire Sikh community on the conflicted Gateway Casino scam, now wants to do away with election signs. Nobody likes 50 million election signs everywhere but eliminating them completely? Come on, that's a bit weird.

I'll admit that having Linda Hepner's painful face plastered all over the city is indeed a form of air pollution. There should be a fine for that. Yet it does fall under free speech and they have to come down after the election is over. Obviously the reason Rasode is concerned about election signs is because she doesn't have the financial backing the others do which once again puts her credibility into question. However, does it always have to be the richest candidate wins? That's not right either. We need to use common sense and shun extremism.