The Site C Dam is better than a Nuclear Reactor 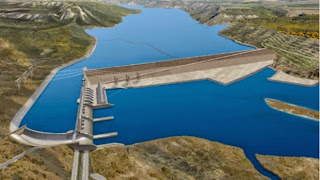 While we're on the subject of sustainable business, we need to talk about the Site C Dam. The mob is fickle and the politicians are spineless. As we speak an oil tanker is drifting aimlessly without power set to crash into the Haida Gwaii off the BC coast. Are we supposed to sit back and watch it happen? Of course not. The coast guard was able to tow it away from running aground temporarily to buy enough time for some tug boats to get there to take control of the situation.

Some people will complain about anything and everything no matter what. There is no pleasing everyone. Some people even complained about the wind generator they put on Grouse mountain. Come on. Are we really supposed to sit at home in the dark without computers, iPhones or Internet and not go anywhere? Oil spills, tar sands and toxic tailing pools of fresh water are legitimate environmental concerns. Nuclear reactors are another.

As we speak the Fukishima reactor is still leaking radioactive water into the pacific ocean contaminating an ocean of fish and an entire food supply. Instead of arguing back and forth trying to hide and deny that fact, let's put our heads together and stop the freaking leak. We can argue about clean up until the cows come home. Until then let's stop the leak and stop it from getting worse. Hiding that ongoing disaster is not socially responsible.

There are huge concerns with nuclear reactors. As we have seen, they are dangerous and can create serious health risks in any natural disaster. As we have seen, they produce radioactive waste that is virtually impossible to dispose of safely. Not only that, but when we give China, Libya or anywhere else nuclear reactors we give them the technology and materials to make nuclear weapons. That is not socially responsible. As we speak Stephen Harper has relaunched the nuclear arms race.

In contrast, hydro electric dams are much safer and environmentally friendly. Next time you go to Grouse mountain, stop off at the Cleavland Dam and take a look at the horrible environmental damage that longstanding dam has done to the ecosystem. It has created a wonderful park and lake that is still used as a water shed for drinking water. It is totally clean and has powered Vancouver for many years.

Have you ever gone boating on Stave Lake or Alouette lake? Those lakes were created by hydro electric dams. There are numerous dams in the lower mainland that have served us well. They are clean and sustainable. As I've said, some people will complain about everything given the chance. Flooding a forest is an initial concern. So log it first before it's taken out by a forest fire or the pine beetle. If people own land that will be flooded, they have to be fairly compensated.

Years ago I was handing out flyers in front of the Vancouver Art Gallery. A couple of transient punk rocker kids were giving me a hard time and yelled out "How many trees did it take to make your flyers?!" Without hesitation I yelled back "How many trees did it take the last time you went to the bathroom?!" He stopped in his tracks and with a stunned look on his face turned to his girlfriend as if to ask what the hell I was talking about. She finally broke the awkward silence by saying "Toilet paper. Everyone uses toilet paper and it takes trees to make toilet paper." The guy just kind of pondered that for a while and realized that he and everyone else uses trees to some extent. The challenge is to be sustainable. Cut down a tree and plant three in it's place. That's responsible. Clear cutting forests without tree planting is not.

When I look at the Site C Dam proposal it looks like a freaking park with a lake that would be teaming with boaters and recreational uses. It's a lot better than a nuclear reactor. It never ceases to amaze me that with all the relatively modern technology of splitting an atom, all the brain surgeons do with it is create heat to boil water to turn a steam turbine that generates electricity. The same thing a hydro electric Dam does only not as effective. Hydro electric dams are the power of nature. Imagine tapping the power of the Niagara falls. That's what hydro electric dams do.

The only real concern that I can see is the risk to spawning salmon. So how do we respond? We create a fish hatchery which improves the survival rate of the Salmon. On your way to Grouse mountain and the Cleavland Dam on Capliano Road, stop off at the fish ladder and hatchery on the way. You can see if for yourself and hike all around that wonderful sustainable ecosystem.

Take a look at the location of the proposed Dam. There are already two dams on the same river up stream. Stave Lake and Bunsen Lake are a chain of dams and tunnels that lead into other dams. That's good business. We would be much better off helping China build hydro electric dams then helping them build coal plants and nuclear reactors to reignite the nuclear arms race. 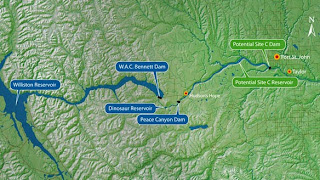 Note: Using the site C Dam to collect water to sell to the US for fracking would be a bad idea. Using the dam to generate electricity is a good idea. Electric cars need electricity to operate.