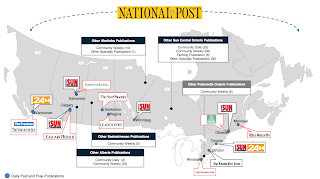 There's a new media acquisition in the news. CBC is reporting that "Quebecor has agreed to sell all 175 English-language newspapers it owns under the Sun Media banner to Postmedia, the owner of the National Post and others, for $316 million. The properties include the Toronto Sun, the Ottawa Sun, the Winnipeg Sun, the Calgary Sun and the Edmonton Sun, as well as the London Free Press and the free 24 Hours dailies in Toronto and Vancouver. The websites for those publications, largely based on the canoe.ca portal, are also included."

"If it goes through as announced, the deal would mean Postmedia, which was built out of the ashes of the former CanWest media empire, would control just about every major English-language newspaper in Canada that isn't based in Toronto (the publishing home of the Toronto Star and The Globe and Mail)."

Business Vancouver is reporting that "This leaves the Vancouver edition of the Metro newspaper as the only English-language daily in the city not owned by Postmedia." Will they be able to compete? Perhaps this will make them higher in demand because they are independent.

I don't want to be a stick in the mud but if they are going to own every major newspaper in Canada except for Toronto Star and The Globe and Mail, where is the Freedom of the Press? I'm all for the media making a profit. What concerns me is corporate monopolies. It was more of a concern back when Conrad Black started buying up all the news outlets in Canada. He had a staunch reputation for being politically motivated and firing reporters who didn't tow his line. What if all these media mergers continue and then someone like Conrad Black becomes the CEO again. There goes the freedom of the press. Looks like we're back in black. So back in black means they're out of the red or does it mean Conrad Black is coming back? Please advise.

OK so again, the whole concept of corporate monopolies concerns me. It's doesn't matter if it's Enbridge or the Hells Angels monopolies are bad. Guys like Conrad Black claim they're right wing. So then I ask, Do you support corporate monopolies? Of course they reply. We want to make money. Corporate monopolies are the best way to make money. But what about the free market? Big business is the free market. We take it over and crush the little guy. That's the free market. Survival of the fittest. What about small business? Screw small business. We're big business. Hostile take overs consumed with greed. That's what we're all about. Big business, big money - for us. Screw the consumer and screw the tax payer. They owe us for giving them a job.

I see. So how do you feel about Communism? We hate Commies. They want to share all the profits with everyone. But they don't. They're just as greedy as you are. Exactly. That's why we funded the Communist Revolution in Russia. But don't tell the world that. The better dead than red line is a great sell. People eat that BS up as we take their money to the bank. That is not right wing. That is not a free market. That is Corporate Communism. It leads to the same place.

So back to media profits. I'm all for the media making a profit. That is the free market. It's rather sad that the Toronto Star valued their 20% shares in our local papers owned by the Black Press as zero. Makes for a competitive market indeed. That's why many are concerned with the term main stream media and how that relates to corporate media. Large corporations buying media outlets or spending money on advertizing thus controlling what the papers print. That is concerning because it affects the freedom of the press. Remember what happened to Dan Rather and Gary Webb. 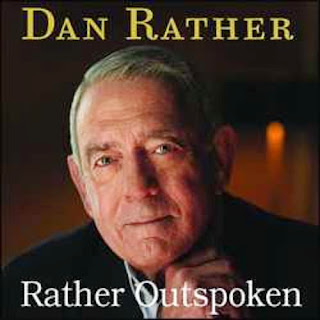 I recently had a heated discussion with a member of the media about copyrighted photos. If a media outlet took a picture of a rapist or a serial killer and published it in their paper, you would think they would want the public to pass that photo on through facebook or other social media to get the word out. What if they said you're not allowed to pass that photo on because we have a copyright on that photo? They'd certainly be within their legal rights but what about public safety? Would keeping that picture from the public be morally right? I personally don't think so. Apparently, some media outlets disagree with me.

I had one small paper in Halifax get all freaked out because I quoted one of their stories once. Then they complained that I changed the wording despite the fact that I linked to their story. That's what bloggers do. They quote a news article and comment on it. That's legal. Copyright is a different matter. Yet I would apply the same logic to pictures of gang members. Sharing those photos is a matter of public safety. Newspapers don't own the copyright to police handouts or photos they stole from facebook. I share any photo that has been given to me freely with the media because I offer a fee public service. I'm not trying to sell newspapers.

I realize it's hard for newspapers to make a profit in our day. I just don't think withholding pictures of gang members is the way to do it. Bloggers increase traffic on newspaper web sites. If a blogger sees a picture in a news article and passes on the picture with a link to the news article, that will increase traffic on the news article. It's a win win situation. The public sees the picture and the newspaper gets increased traffic which will relate to more advertizing revenue. Some people don't see it that way. I guess I'm too idealistic.

Update: Ironically enough, the National Post is reporting that Conrad Black is indeed trying to make a come back as we speak. This is bad. Very bad. It also puts the media merger into question. He already writes a column for the financial post now that he's out of jail. Perhaps they'll make him a Fox TV News host along with Iran contra criminal Oliver North.