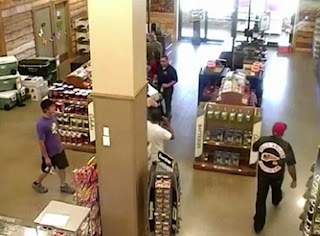 Last August we heard news that Saskatoon Hells Angel Jesse Bitz will stand trial in October for uttering threats kill the owner of Xtreme Mining and Demolition. Well, it's October and as several blog readers have pointed out, the trial is under way.

The Star Phoenix is reporting that Xtreme Mining’s owner, Leonard Banga, testified Bitz threatened to kill him on three occasions. Banga said he phoned Bitz on Dec. 23, 2012, after getting a report that Bitz had been caught sleeping on the job by an employee at the Agrium Vanscoy potash mine and then threatened the employee. Banga said he told Bitz, “If you get caught sleeping at work and you threaten somebody, you’re fired.” Bitz replied, “‘Nobody fires a f----n Hells Angel’ ... He said if I try to fire him, he’s going to f---n kill me,” Banga told court.

Banga’s wife Michelle also testified on Tuesday. She said she was sitting next to Banga during the phone conversation and could clearly hear Bitz yelling, “You can’t fire a Hells Angel, you’re f----n dead.” Testifying in his own defence, Bitz said he remembered the conversation differently. He denied saying he’d kill Banga. “I told him I’d smash his face in,” Bitz testified.

"On Dec. 31, 2012, Banga and Bitz met south of Saskatoon, but that conversation didn’t go well, ending in a fight on the side of road. Banga said Bitz threw the first punch and the fight ended when he wrestled Bitz to the ground." Bitz threw the first punch and his boss took him to the ground. The two men didn’t have any more contact until they ran into each other on June 24, 2013, at Cabela’s. Banga said Bitz started yelling at him, saying he’d never forget what happened on the side of the highway. (when the boss kicked his ass)

OK so the brain surgeon that was caught sleeping on the job admits to uttering threats in colours on several occasions. He claims he threatened to assault his boss, witnesses claim he made death threats. The fact is, by his own admission, he threatened his boss in coulors on more than one occasion. On top of that he was caught on video confronting his boss is a store.

The Star Phoenix posted the video the court saw were the Hells Angel wearing colours storms into the store right after his boss and girlfriend enters it, confronts him with his finger in his face then storms out showing his colours for the security camera. This guy is brain dead. Threatens someone in colours on camera in front of a witness. Good luck with that buddy. Who's a dead man now? The Saskatoon Hells Angels are suing for wrongful dismissal. If they only had a brain. 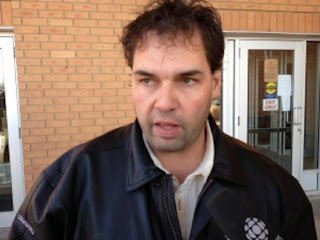