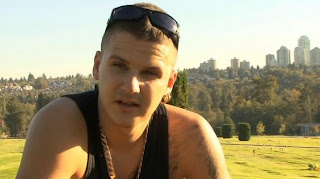 Speaking of Tony Terezakis, his son is making a movie called Born into Gangs. Tony had his son film him beating the life out of drug addicts that owed him money in East Vancouver. His ex wife found the tapes and gave them to the police. Big Tony worked for the Hells Angels. As soon as he got out of prison they capped Juel Stanton who was working in Tony's area. Capping Big Tony won't change the fact that the Hells Angels endorsed his exploitation of the homeless for so many years. That's how they made their money. Blood money.

Somehow I doubt they'll include Tony's involvement with Piggy's Palace and the Pickton Farm in their movie or anything about the Dianne Rock Story. The part of the Dianne Rock story that wasn't found in court transcripts was the claim that she was gang raped on the Pickton farm by bikers and police. Which forces us to question how involved RCMP bondage freak Jim Brown was with the Pickton farm and just how well he knew Dave Pickton.

Nevertheless, the movie Born into Gangs should be a good look inside the brutality and exploitation of the homeless that the Hells Angles in Vancouver profit from. Not to mention Ricky Ciarniello and the Devil’s Butler. Much. That'll be in my eBook due to be released December 10th.