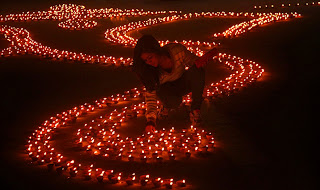 As all the drama settles, I saw an interesting article the other day. Seemingly Richmond City council is considering making a sign bylaw requiring English. Are you kidding me? Here in BC we've always raised an eyebrow at Quebec's sign law. After all it's a free country. If someone wants to make a sign in Korean or Chinese or Punjabi, who cares? Let them. Now all of a sudden some residents in Richmond are starting to get creeped out as they become the minority. All of a sudden we now see how the French feel in Quebec.

The city council has backed off on the bylaw because a lawyer told them it would violate the Charter so they decided to send someone to have a talk with businesses that have Chinese only on their signs. Say hi to them for me will ya? Give them a warm welcome for me. Chinatown is the heartbeat of Vancouver. It's never been a problem before. Now all of a sudden we're getting red neck and racist? Come on people, we're above that.

Speaking of diversity, Happy Diwali everyone. Diwali is the festival of light kinda like Hanukkah. Vaisakhi is the one with the parade. Buddhists celebrate Diwali as well. My daughter reminded me it was Diwali. That's what all the fireworks were last night. I thought it was just another night of Halloween fireworks. A friend commented on how their daughter recently had to do a report on Diwali. They thought it was rather unfair the kids can celebrate other holidays but aren't even allowed to mention the word Christmas. That's a good point. We can do both.

Nina Grewel, an MP for Surrey doesn't have a problem with saying Merry Christmas. Diversity makes us strong. I'm all for butter chicken but I have to admit the Caribbean brothers make the best curry on the planet. I love a nice curry mutton with rice and peas and a Guinness stout. Now that's multicultural.