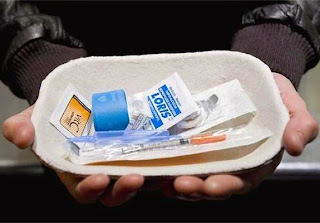 This is a lethal injection kit from the assisted suicide centre at Insite. Yesterday the Vancouver Province reported that there were 21 overdoses at Insite in two days. The spike in overdoses has prompted police to issue another warning about "bad" heroin on the street. Not that there's any such thing as good heroin because it is a poison but this batch is even worse which is indeed a public health risk.

Today the Vancouver Province is reporting that it's now 31 overdoses. Insite and the needle exchange program is a failed social experiment. It is dramatically increasing the number of addicts not decreasing them. Harm reduction is in reality harm promotion and the only ones benefiting are the drug dealers selling the poison on the street.

You don't give alcohol to alcoholics as treatment. That would not be humane or socially responsible. Likewise, helping heroin addicts slowly kill their brain and body is not a humane response to addiction. Turning people into zombies has nothing to do with promoting health and welfare. It is the exact opposite. [Dr. Colin Mangham on Insite]

There's a bad batch of ecstasy out there as well. One woman in Saanich just about died from it. The Vancouver Province is reporting that "the active ingredient in ecstasy is MDMA — a drug often not even included in batches of ecstasy."