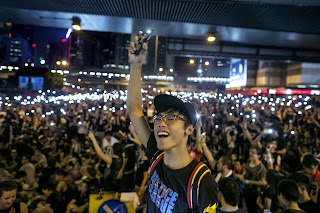 The Economist is reporting that "On October 21st senior officials in Hong Kong held talks live on television with protesters clad in T-shirts displaying the slogan 'Freedom now'. The encounter was the first between the two sides since pro-democracy unrest broke out in Hong Kong nearly a month ago, and the first of its kind anywhere in China since hunger-striking students in Tiananmen Square met government leaders in 1989. The meeting, however, was as unproductive as the one 25 years ago... Hong Kong’s leader, Leung Chun-ying, has said that Hong Kong is “lucky” that the central government has not yet felt it necessary to intervene."

The Guardian is reporting that China is furious with Kenny's G's support of the Hong Kong protest for democracy. Wednesday morning, Kenny G had tweeted a picture of himself making a victory sign in front of a poster reading “Democracy of Hong Kong”, and wrote: “In Hong Kong at the sight of the demonstration. I wish everyone a peaceful and positive conclusion to this situation.”

China blocks Twitter. "Within hours of his tweet, the Chinese foreign ministry had issued a frosty condemnation of his display of solidarity. 'Kenny G’s musical works are widely popular in China, but China’s position on the illegal Occupy Central activities in Hong Kong is very clear,' ministry spokeswoman Hua Chunying told a news briefing, according to Reuters. 'We hope that foreign governments and individuals speak and act cautiously and not support the Occupy Central and other illegal activities in any form,' she added." Is that why nothing is in the local press about this and why Ottawa is putting pressure on Vancouver to stop protests outside the Chinese consulate? When are we going to send in troops and air support to help their struggle for freedom?

Why isn't there anything in the local media about the fact that Fukishima is still leaking radioactive water into the pacific ocean? Is it because Harper is determined to sell Communist China nuclear reactors giving them the technology and materials to export nuclear weapons to every terrorist organization on the planet reigniting the nuclear arms race?

Why isn't there anything in the local media about the fact that Obama is in contempt of court for withholding the Fast and Furious documents? They didn't let Nixon get away with withholding the Watergate tapes after the court ordered him to produce them. Is the Borderland Beat the only ones covering Fast and Furious? Hong Kong supports Snowden. NBC: Hong Kong Protests 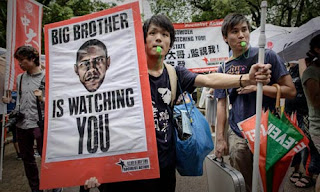 Posted by Dennis Watson at 3:26 AM