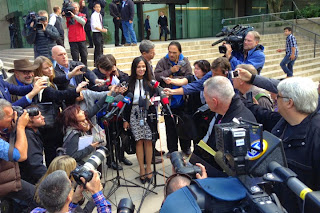 The Surrey Now is reporting that B.C. Supreme Court Justice Catherine Wedge found Cody Haevischer and Matthew Johnston each guilty of six counts of first-degree murder and conspiracy to commit murder. BF posted a link to the decision. We know that a third suspect was originally charged but made a surprise guilty plea during the trial.

The real trial will be the separate one for Jamie Bacon who has been accused of masterminding the entire murder plot. Sophon Sek is another suspect that I believe will be tried separately as well. He made bail. It was alleged that he knocked on the door of the suit to get the murderers in the apartment. Yet someone had a fob which got them into the building so I'm not sure exactly what Sophon Sek has been charged with.

We also know that person x, not to be confused with the original person x who later became person y was present during the murders and already plead guilty. I believe he confessed to killing Chris Mohan one of the two innocent bystanders. We also need to recognize person y who came clean and set the whole thing in motion. A big salute to the real soldier in the midst.

I think Global had it a little bit confused when they said that the suspects murdered a rival drug dealer. They weren't rivals they were affiliates. Jamie Bacon tried to tax them for selling drugs on "their" turf. That's pretty bizarre since the Bacon brothers are from Abbotsford not Surrey and the Hells Angels are the ones in control of the Surrey drug trade not the Bacon brothers. Jamie Bacon sure wouldn't be trying to tax Hells Angel crystal meth cook Ryan Remaud. I submit that Jamie Bacon was trying to collect on behalf of his brother Jonathon's long time friend Larry Amero and the Whiterock Hells Angels. Jamie Bacon couldn't even go to the gym without a body guard.

He wasn't in charge of anything. He was an ork who was supplied and empowered by the Hells Angels. Larry Amero finally came out of the closet with his support of the Bacon brothers in Kelowna when he was shot with Jonathon Bacon and Spike's niece.

Yet the real focus of this trial is on Eileen Mohan, Surrey's own Mother Teresa. She's the reason I started this blog and web site. Her heartfelt plea was what touch person y's heart and caused him to cooperate. The heinous nature of the crime is what caused just about everyone else to flip as well. Killing innocent civilians crosses the line completely. As a result the Bacon brothers are hated in Surrey to this day.

Although nothing will bring her son back, the two convictions must be a huge relief to a very stressful trial. It's so nice to see almost a smile on her face after years of real sorrow. The Surrey Now posted a video clip of Eileen Mohan speaking to the media after the convictions. 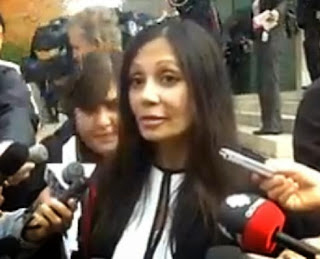