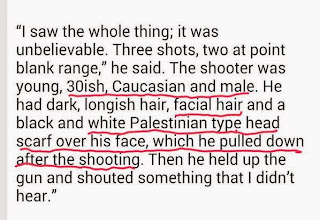 Well it's all over the news. A Canadian solider was shot dead today in Ottawa near the Parliament buildings. The timing of this staged event is obscenely suspicious. Right before Harper and Trudeau Jr. passed an illegal bill that violated the Charter of Rights, CSIS foiled a terrorist bomb plot on Via Rail they set up to gain public support for the illegal bill. In Australia, right before parliament was to debate a similar bill doing away with civil liberty, their terrorist police shot an innocent man dead pretending he was a terrorist.

Today we have a radicalized white guy shoot a Canadian solder dead. Let me tell you that radicalized Islamic terrorists don't smoke pot or do PCP. This staged side show is to give Harper support for another absurdity. After CSIS was caught read handed by the RCMP for doing Air India, instead of charging them with murder Harper wants to give them more power to continue to break the Charter of Rights and use tax dollars to set up staged events like the Toronto 18. How about a task force to help CSIS find the 3.1 billion tax dollars they stole from their budget.

10:30 AM as the news was breaking live, the US department of defense was on hand to give their report. What on earth did the US department of defense have to do with this staged event? Did they set it up like the Surrey Pressure cooker fraud? Today is the day Canadian truthers have feared. The day when Canadian intelligence organizations would cross that sacred line like British and US intelligence agencies have done in the past. When instead of simply foiling a terrorist plot they set up, they actually murdered an innocent man. Today is a dark day indeed. Before giving CSIS more tax dollars to set up any more terrorist attacks and more power to break the Charter of Rights, they need to be criminally charged in the Air India bombing.

"While it is too early to jump to conclusions, I intend to hold fast to the following: we must ensure that this appalling act of violence is not used to justify a disproportionate response... We need to protect our rights and liberties in a democracy. We do know that through history these kinds of events open the door to a loss of democracy. Naomi Klein details the elements of seizing the opportunity created by tragedy or tumult in Shock Doctrine. The title of her new and important book on climate, This Changes Everything, is correct – the threat of the climate crisis changes everything. The shootings on Parliament Hill do not change everything. It is up to all of us to ensure that, to the extent we encounter demands for change, we keep in the forefront of our minds that once we surrender any rights it is very difficult to restore them." Elizabeth May

Is BC Safe from CSIS? Certainly Not!

In contrast today's Vancouver Province is dripping with absurdities. The dramatic headline reads: Parliament Attacked Is BC Safe? Page after page was filled with ridiculous articles festering the insanity. One article citing the shooters BC connection admits he was charged with robbery December 2011. Don't you think that's a bit suspicious? Muslim extremists get all freaked out about minor religious rules. They don't steal. That's a big one. They think if your hand causes you to steal you should cut off the person's hand. It is extremism. So any guy with a criminal record for theft or having pot and PCP is not a radicalized Muslim.

To my surprise even Michael Smyth jumped on the band wagon by bringing up the ultimate absurdity. The headline to his column in the printed edition read: Tragedy brings back memories of BC plot. Are you kidding me? The Canada Day plot was a bold faced lie. John Nuttall was originally charged March 2nd. Long before any Canada Day foiled plot.

Michael Smyth's article goes off about "That beautiful sunny day saw the front lawn of the legislature crowded with celebrating families. The thought of anyone contemplating the murder of so many innocents — including hundreds of children — seemed bizarre and surreal that day. Then you watch and listen to the madness in Ottawa, and you suddenly realize there’s nothing unreal about terror and hate. It can strike at the heart of any of our institutions at any time. That’s why the authorities must be vigilant to protect all Canadians everywhere." Did you really write that or did they just put your name on a CSIS press release?

That was the exact scenario CSIS dreamed up. John Nuttal did not have the means or the motive to carry out such a heinous crime but CSIS did. CSIS had the means, the motive and the previous criminal record for doing exactly that. CSIS gave John Nuttall the pressure cookers. They had food in them. They had no idea how to make a bomb out of them. The BC Pressure cooker fraud is the exact reason we need to investigate CSIS for this tragedy in Ottawa.

The police are asking anyone with any information about this crime to contact them. I have a tip for the police. Investigate CSIS. When you find out this radicalized Muslim with a criminal record for theft and drugs was connected to CSIS watch how fast they shut you up as a matter of national security just like they did when the RCMP investigated Michael Riconosciuto. The dejected officer shakes his head. "We got further than anyone else ever did on this case," he says, "and nobody outside of law enforcement will ever know what we found because no one in law enforcement can ever tell anyone what we found." I can tell you that if they found out that Michael Riconosciuto was guilty they'd be able to tell the world. The only possible thing they found that they can't tell the world is that he was innocent and everything he said about then agency was true but they can't confirm that because it's a matter of national security. Not. Oath Keepers arise.

This attack was clearly staged. It was planned ahead of time. It serves as a tactical diversion for passing illegal bills in parliament that do away with civil liberty. Compare the US Patriot Act with the Soviet Criminal Act. When diversions like this occur, watch parliament and Defend Civil Liberty. They just passed Bill C-13 which is illegal. What CSIS did to Air India is no laughing matter.

The Tomb of the unknown soldier? Really? This is something so far fetched that only CSIS could dream up. No whacked out foreign terrorist is going to know what the tomb of the unknown soldier is and what it represents to Canadians. Let's say the shooter wasn't acting on his own and that he was with ISIS. Shooting a solder standing guard of the tomb of the unknown soldier is likely the worst thing conceivable they could do to gain support for their cause. In essence it would be literally begging us to kick their ass. We were initially led to believe that Afghanistan did 9/11. The result was we joined forces to invade them. Logically anyone with a brain knows these provocative attacks will result in war not retreat.

I'm not saying we shouldn't fight ISIS. Quite the contrary. When any group rises up to oppress others it behooves us to get involved. We don't need a Perl Harbour to force us to stand up for justice. I just don't think ISIS did this. I think there is an even bigger and much more serious threat out there that we are over looking. Kinda like how in the war we were so focused on Hitler we let ourselves be broadsided by Stalin. It's the same thing.

Anyone who knows anyone who was involved in the first and second world war knows that after the war there was a fair bit of animosity towards the Germans. We all thought how could they be so brainwashed to follow such a mad man. Well wait 'till I tell ye. Hitler burned down the German Parliament buildings and blamed it on terrorists so he could get extras powers. Then he burned down a German radio station and blamed it on Poland to justify and invasion. That's how. So ask yourself as you scoff at truthers, if we lived in Germany during the time of Hitler and terrorists burned down our parliament buildings would we not have done the same thing to rally together to opose the terrorists? Are we any different now then the Germans were then?

Harper's offensive fund raising in the wake of a soldier's death.

Canadian discusses the real motive behind the Ottawa shooting.

The Abby News is reporting that Federal NDP leader Tom Mulcair on Wednesday said last week's shootings in Ottawa were not 'terrorist' attacks. "When you look at the history of the individual, attempts to get help, even to be in prison to get help if that turns out to be the case, I think that we're not in the presence of a terrorist act in the sense that we would understand it," Mulcair said today. "I think that we have to be very careful with the use of the word 'terrorism', make sure that that's actually what we're dealing with."