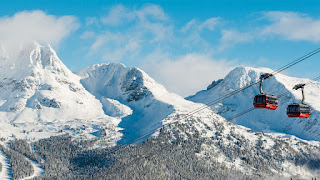 Global is repporting that "An avalanche killed a snowboarder within the Whistler Blackcomb ski areaThursday. The resort confirmed a 42-year-old woman from New South Wales, Australia was caught in an avalanche along with her 36-year-old male companion in a permanently closed area above Lakeside Bowl on Blackcomb Mountain. The couple survived the avalanche and managed to contact first responders, who rushed the female to the Whistler Health Care Centre. Emergency Health Services confirmed they received a report of a patient enroute to Whistler Health Care Centre just before 2:30 p.m. The woman later died from her injuries. The male was later rescued from the area and is believed to be in stable condition."

The woman was from Australia. "The slide came on the same day that Avalanche Canada issued a warning for the South Coast and Vancouver Island due to a weak snowpack and the possibility of fresh snowfall on Friday." Avalanche Canada is urging people to carry essential rescue gear, including a transceiver, probe and shovel, and know how to use it.

A local snowshoer was killed by an avalanche in the back country on Seymour Monday.

Posted by Dennis Watson at 3:33 AM