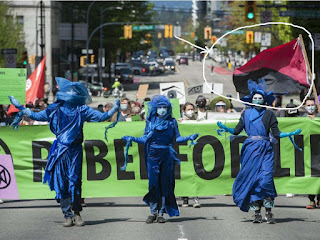 I've got a lot more important things going on right now but I will say this about the fake environmentalists blocking traffic in Vancouver over the weekend. Lawful assembly is a Charter Right. Anyone has the right to stand on the sidewalk with a sign saying stop climate change, stop communism or stop whatever you want. As long as you don't block the sidewalk and prevent other people from using it. Blocking traffic is not a Charter Right. It is illegal. The police have every right to arrest you for blocking traffic. They also have a moral duty to because a minority does not have the right to steal from or hold the majority hostage.

I refer to them as fake environmentalists because that is exactly what they are. Take a look at their flag: Black and Red. That represents Anarchism and Communism. The Anarchists want to create lawlessness and the Communists wan to create order amidst the chaos, their order. This is the same flag as ANTIFA. ANTIFA are the ones who built the Berlin Wall.

Drea found a video clip of Justin Trudeau saying he has a lot of admiration for the dictatorship of China. Commodus admires genocide. He admires the removal of civil liberty and the violation of human rights. He then rationalizes that with a bold-faced lie. He said their dictatorship has allowed them to turn their economy around on a dime and go green. 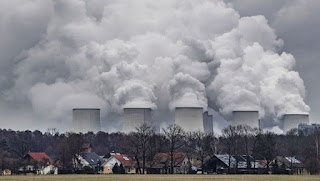