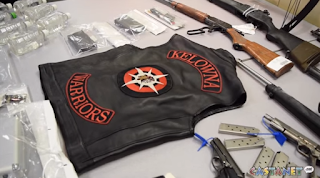 Castanet is reporting that " Twenty-four drug and weapons charges against two West Kelowna residents were dropped Tuesday on the day their jury trial was set to begin, but the Crown won't say why. The charges were laid against 35-year-old Tyson Bone and 27-year-old Savanna Malone in July 2016, after police raided a home on West Kelowna's Windt Road and seized drugs, guns and ammunition."

"At the time, Kelowna RCMP said the items belonged to a new gang in town, called the Kelowna Warriors. A Kelowna Warriors leather vest was included in an RCMP media presentation to show off results of the raid, along with several guns, a crossbow, GHB, cocaine and methamphetamine. Police also said a seven-year-old child was found inside the home."

"Following the raid, both Bone and Malone were charged with three counts of possession for the purpose of trafficking, along with 17 additional firearms offences. After the case was sent to a Supreme Court trial following a preliminary inquiry in November 2017, a jury trial was scheduled to begin this week. But at the last minute, the Public Prosecution Service of Canada stayed all the charges against Bone and Malone Tuesday morning. And they won't say why."

"A 2016 Supreme Court of Canada decision ruled that Supreme Court cases must be completed within 30 months of charges being laid, or be at risk of being thrown out. Bone and Malone's case was more than 34 months old, but the PPSC would not disclose if this was the reason the charges were stayed." Looks like they blew it on time limits again.

Malone doesn't sound First Nations but she looks like she could be. Tyson looks white. I think they should focus on getting their child back from social services. Just sayn.