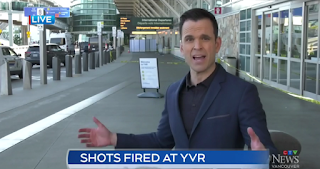 CTV is reporting that "Homicide investigators say the victim of a brazen mid-afternoon shooting outside Vancouver International Airport Sunday afternoon was a 28-year-old man who was known to police. The shooting prompted a large police response around 3 p.m. that briefly involved shutting down three Canada Line stations and several major roadways in an effort to prevent the killers from getting away. Ultimately, however, they did get away."

"Integrated Homicide Investigation Team spokesperson Sgt. Frank Jang told reporters at YVR Sunday night that an SUV found on fire in Surrey, 28 kilometres away from the crime scene, is believed to be the getaway vehicle. The Richmond RCMP detachment said earlier Sunday that its officers had intercepted the suspect vehicle as it fled the scene, and that the suspects inside fired weapons at police. No officers were injured in the incident, according to RCMP."

This is new. These guys normally just shoot at each other they don't shoot at the police.

Dr Spin and the Indo Canadian Voice are reporting that the victim was Karman Grewal. IF Karman Grewal was affiliated with the UN 6 years ago, it only makes sense he is affiliated with the Kang Group now. The ones the Hells Ange are eliminating. Once again, the Hells Angels are responsible for this new spike in violence. The NDP are aiding them because they don't want to stop crime, they just want to profit from it. The Hells Angels are still at the root of BC Gang conflict 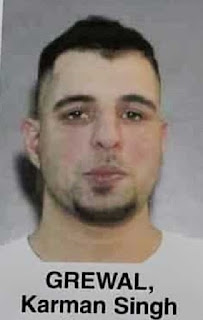