Stan Price and Kids Play: How to save a life 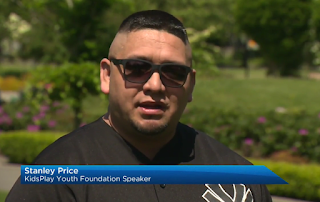 Global recently ran an article saying that the Metro Vancouver gang war is spilling over to Calgary and Nanaimo. They are correct. It is because we are not enforcing the law. Enforcement is one of the four pillars and we're simply not doing it. Wherever you let drug dealers sell drugs in public, violent crime in that area will exponentially increase. Whenever there is that much money to be made, drug dealers will shoot each other over the profit but that's not all. The rapes, assaults and robberies always go up wherever illicit drugs are sold.

When we remove three of the crucial pillars in the four-pillar program, harm reduction becomes harm promotion. Addition and crime dramatically increase. The corruption we see in BC law enforcement now is different than the corruption we saw in the New York police corruption during their crack epidemic back in the /80's which I saw firsthand. The corruption here doesn't come from the bottom up, it comes from the top down. It ties in with the provincial government.

For the most part, law enforcement officers here are sincere. The problem is, their hands are tied and upper management is corrupt. The police make Hells Angel drug busts in every province in Canada except BC. The RCMP isn't the problem. BC is. Dwane McDonald has become part of it.

Kal is the founder of KidsPlay. A non-profit group that speaks to at risk youth about gangs and gets them involved in positive sporting events. He is a VPD officer who has worked the gang beat in the DTES. He has former gang members on his speaking team. These are the people kids need to hear from. The RCMP don't want to share their speaking gigs in the schools because they get paid overtime to do so. Kal's group is non-profit. Bringing them in would do a better job and save us money. It would allow for more boots on the ground to enforce the law.

Global ran another article about former gang members speaking out on the escalating gang violence. They interviewed Stan Price who is a former gang member that has left the life and has joined KidsPlay. These are the people we need speaking in schools. That is prevention.

Stan was with Redd Alert when they took back all the drug dealers in the DTES from the UN for the Hells Angels. He has since left the life and has become a positive role model for youth. I have never met Stan and I have never asked him his opinion about the murder of Glen Nelson's wife. He left before that happened. Stan's message is that many people in gangs think they're stuck and can't leave. He is living proof that you can leave. There are others.

Shane Knox has left the life and joined KidsPlay as well. He was with the UN. In Calgary, someone came with a gun to threaten his GF. He was able to disarm the guy and get out of there. As he was coming out of the elevator, five more guys came at him, one with a mac-10. His gun jammed so he ran at the guy with the Mac-10, ripped the magazine out and pistol whipped him. The fight was caught on surveillance camera. Stan is a big guy, Shane is not. Shane was the real deal. Shane is also proof that you can leave the life.

Shane used to run the drugs for the UN out of the Balmoral. He used to live there with his mother when he was very young. Shane hasn't ratted anybody out. There's no need to. I always say, if you want to leave the life just leave. Pay your debts and keep your mouth shut.

The Hells Angels only care about one thing: money. If you're selling drugs and want to leave the life, there are a thousand guys who would take your place. The Hells Angels are concerned that if you know too much you will rat them out. That makes you a liability. If they are confident you will keep your mouth shut, they have no reason to kill you. Killing you costs money and they rather save the money. That yuppie who infiltrated Vagos was a crystal meth dealer. He got busted so he ratted out his friends to stay out of jail. Nobody admires that.

Stan's message is that it is possible to leave the life. He is living proof. My message is that life is a lie. There is no honour in it. Only greed and betrayal. Mind how ya go. It's time to save a life.