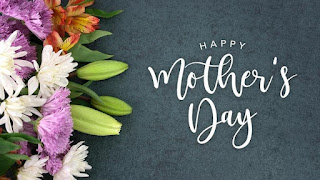 Today is Mother's Day in Canada. I realize other countries celebrate it on other days but the important thing is to honour motherhood. Last year a medical condition forced me to call a doctor. He looked at my Xray and asked how's the pain and I said compared to what? Childbirth? Everything is relative so it is. The male ego falls short in hospital case rooms around the world.

I realize there are good mothers and bad mothers just like there are good fathers and bad fathers but for the most part, all of us do our best. There's no such thing as the perfect child either. All of us have strengths and weaknesses and all of us make mistakes. Life gives us the opportunity to learn and grow. Martin Luther King said the old law of an eye for an eye leaves everyone blind.

One year Kerri Krysko gave a shout out to all the fathers who've had to take on the role of mother as a single parent. Likewise, many mothers have had to also take on the role of father while raising their child. I always used to say sometimes no father is better than a bad father but like I said we all just do the best we can and we all want what's best for our children.

Sometimes we fall short. Human limitations show us the need to rest, learn and grow. Previously I've made posts about fathers in the hood and as I recall the predominate theme in those is that a good parent protects their children. They do not put them in harms way.

I realize that poverty removes that option for many. Some people don't have a choice - they can't leave. Others valiantly charge in trying to save those who can't afford to leave. Personally, I can't serve in the DTES anymore. What we are doing there is wrong and it breaks my heart.

I'm not reporting on the situation in Colombia anymore because I think both sides are wrong. Obviously, the military using live ammunition on protesters is an abomination just as it is when the military dresses up as civilians and shoots protesters dead. I'm not disputing that. That is why I broke my standard and posted pictures of dead bodies to show that they were actually doing that. However, I do not support the protesters any more either.

Initially they weren't protesting the lockdown they were protesting the tax hikes during the lockdown which were ill-timed. However, calling a general strike was also ill-timed. Right now, we need to support commerce. Protesters blocking roads restricting the travel of other civilians is completely unacceptable. That has created a knee jerk reaction where the military has over reacted. We are all responsible for what we do.

Yet in times of war, what we do can fan the flames or calm the conflict. The army shouldn't be shooting civilians they should be shooting the people blocking the roads. I remember back in Belfast, sometimes the army would use a sniper to take out IRA members as they were walking home in public. I'm not saying it's right. I'm just saying they targeted those people for a reason just like the IRA targeted them for a reason. It was a war.

In Colombia, the government backed down on the tax hike but the protests continued. They kept wanting more. Kinda like giving into a child when they throw a tantrum. In so doing you create a monster. The new demands were unclear and lacked substance. They just wanted to keep riding the wave. The protesters who continued to protest and continued to block roads after the tax hike was removed showed a lack of respect for life. They knew more people would die.

It reminds me of a scene from Shake Hands with the Devil. General Romeo Dallaire refused to leave and abandon the innocent people being slaughtered. He sees a morbid scene where dead bodies were lying all over the road and instead of driving over the dead bodies, he lines them up in grave formation to respect the dead. The lack of respect for the dead and for the living in our day concerns me. I support law and order. I do not support the Communist paramilitaries or the Narco paramilitaries. Both roads lead to the same place: slavery which I reject.

Today is a sad day for me. Perhaps better times will one day return. Regardless, I will stand true.