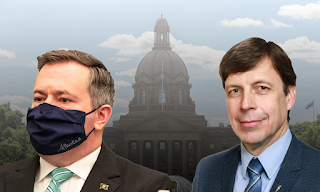 Rebel News is reporitng that "United Conservative Party caucus chair Todd Loewen has stepped down from his position, while also calling for Alberta Premier Jason Kenney to resign."

“I no longer believe that caucus can function properly,” Loewen wrote. “Meetings have been cancelled without members' consent, significant decisions of government have been made without notice to members, and our input as elected members is rarely considered.” Weeks ago, Loewen was one of 17 UCP MLAs who signed a letter highly critical of Kenney for throwing the province back into more stringent lockdown measures. The dysfunction among the ranks of the government, Loewen said, was driven by poor leadership on Kenney's behalf.

The Western Standard is reporting that "The letter comes as Kenney’s leadership is already on the ropes. More than a dozen UCP constituency associations have already passed special resolutions demanding a leadership review, however Kenney poured cold water on the idea, pushing the vote to just six months before the next election.

Jason Kenny is not a Conservative he is a globalist like Rob Ford. Time to examine the election fraud allegations when he became leader of the party. Election fraud matters.