Shooting at Willowbrook Mall in Langley 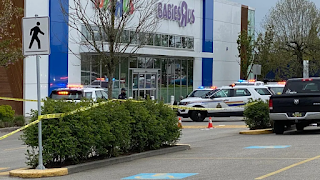 City News is reporting that "One man has been shot and seriously injured outside a busy Langley shopping mall. According to police, they were called to Willowbrook Mall around 3:30 p.m. Monday where they found one man with “potentially life-threatening” injures. Although it is early in the investigation, a spokesperson for the Langley RCMP says it does not appear to be a random shooting. A car was found burning at a berry farm in Aldergrove around 4 p.m., and police are trying to figure out if the two incidents are related."
Posted by Dennis Watson at 4:08 PM