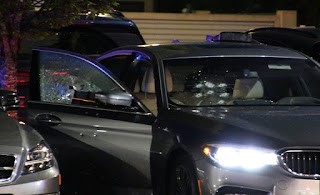 City News is reporitng that "One person has died, and two have been injured after a shooting outside a Cactus Club at Burnaby’s Market Crossing Mall Thursday evening."

The Compromised BC CFSEU told Dr Spin that it was a member of the Brother's Keepers who died. Rivals did not kill Chad and Ali. The club did. I'm not sure if this was a rival or internal. If it was a rival, it was the Kang Group which is now called BIBO (Blood in Blood out) after the Kangs were killed named after Gary Kang's record label.

I do want to reiterate that I do not support the increase in violence. This is what happens when you let drug dealers sell drugs without restrictions. They will always fight over the profits. What we are doing is obviously not working. In the past 10 years nothing has changed because we refuse to address the real problem that Julain Sher mentioned in his book the Road to Hell. Other provinces started making Hells Angel drug busts but BC has not.

I am told the Brother's Keepers claimed responsibility for killing Mo in the DTES which would mean this new fake gang war is just more about the Hells Angels cleaning house.

Update: The Indo Canadian Voice is confirming that the victim was Jaskeert Kalkat.

The two biggest names on the list are Gary Kang, January 6 and Anees Mohammed, January 7th. It was made to look like Mo was killed in retaliation for Gary Kang but the very next day is difficult to plan on such short notice and the Brothers Keepers claimed responsibility for shooting Mo. So when you look at the list, I don't see the Hells Angels taking any hits. It's all one sided. Even Tequel Willis. That one broke our hearts and Little Man from the Driftwood Crips was named for that because the Wolf Pack rolled on him after hiring him.

Posted by Dennis Watson at 1:09 AM