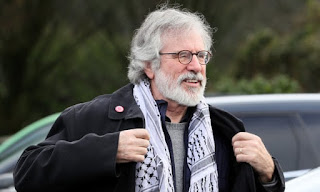 Last year the Journal reported that "Former Sinn Féin president Gerry Adams has won a UK Supreme Court appeal against two historic convictions for attempting to escape from the Maze Prison in the 1970s. Lawyers for Adams, aged 71, argued that because the interim custody order (ICO) used to initially detain him was not authorised by the then secretary of state for Northern Ireland, Willie Whitelaw, his detention was unlawful." 71? Your man Gerry Adams looks good.

In 2019 a Belfast Judge dismissed Gery Adams connection to the murder of Jean McConville. The judge told the jury to acquit them. There is no question Gerry and the accused ordered her murder. The question is was she an informant or did they make a mistake? That is the question that needs to be answered. It was a very tragic story where under the provisional government people were routinely found guilty without a trial. Hard times so they were. For everyone.

Her deceased husband was a Catholic British soldier. Her son Robbie was a member of the IRA and was interned in Long Kesh at the time of her death. After her murder he joined the INLA. She was kicked out of a Protestant district by loyalists in 1969 and moved into the Divis flats with her kids. Then the RA killed her claiming she was an informant leaving her 10 children orphans.

Ya think they would have just told her to leave with her children. I suppose she had no place to go. Former republican prisoner Evelyn Gilroy, who lived near McConville, claimed Adams was an IRA commander and the only person who could have ordered the killing which makes sense. Here no one commits a Hells Angels murder without the order of the local president.

"Boston College had launched an oral history project on the Troubles in 2001. It recorded interviews with republicans and loyalists about their involvement in the conflict, on the understanding that the tapes would not be released until after their deaths. Two of the republican interviewees, Brendan Hughes and Dolours Price, both now deceased, admitted they were involved in McConville's kidnapping. Both became diehard opponents of the Good Friday Agreement and Sinn Féin's support of it. They saw Sinn Féin president Gerry Adams as a traitor for negotiating the agreement and persuading the IRA to end its campaign."

That means Hughes and Price's claim Adams ordered the murder is suspicious. They were mad he supported the Good Friday Accord. They wanted the violence to continue forever.

I also supported the Good Friday Accord just like I supported Michael Collins' Free State agreement for the South that created a civil war. The Free State was a stepping stone to becoming a Free Republic which did happen. In the North it's more problematic. 50% want to be part of England, 50% don't. 98% want peace and want the troubles to end. Protestants and Catholics living together in peace. That is the intent of the Proclomation.

Posted by Dennis Watson at 2:30 PM