Active Volcano erupts in the Congo

The Guardian is reporting that "A river of flaming lava that poured out of the erupting Nyiragongo volcano in the Democratic Republic of the Congo has reached the suburbs of Goma, an eastern city of nearly 2 million people. Officials said on Sunday that the molten stream had reached the airport on the outskirts of the city, but witnesses said the flow appeared to have halted later in the morning." Lava lake rises at dangerous African volcano. 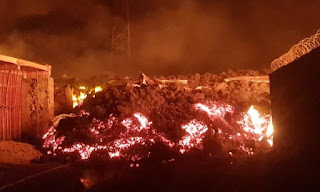 The lava appears to be slow moving but it is massive. At night you can see the red hot glow but during the day the explicit danger becomes deceptive. It looks harmless but it's freaking hot. 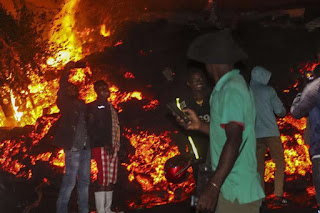