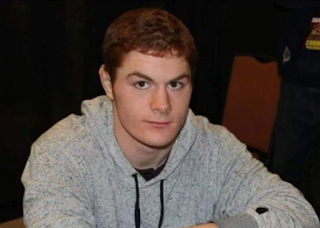 CBC is reporting that​ "Charlottetown police have confirmed that the victim of what they are calling a "suspicious death" on Saturday is 25-year-old Nathan Burke. Police said they are still determining the circumstances around Burke's death and who may be responsible. The scene of the death, a residence on St. Peters Road, was marked off with yellow police tape on Monday. Police officers have remained at the site."

"Burke's aunt said he was an MMA fighter who travelled to Thailand to improve his skills. He was a graduate of the Atlantic Police Academy, trained to be a corrections officer."

He looks like a really nice young man. Local rumors claim he owed money to the Hells Angels and that all his windows were smashed out as a warning before his death. We all know how the HAs like to manufacture debts. Maybe he didn't throw a fight when he was supposed to. If anyone has any comments they'd like to make about this case anonymously that might point the police in the right direction to solving his murder, I'm all ears. I'm not the police. I do respect anonymity.