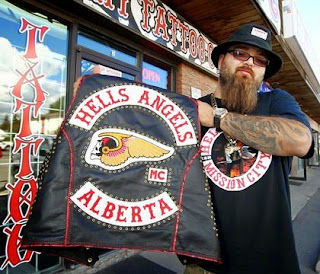 Law-enforcement officials also called local bars to alert them of the possible presence of Hells Angels members in their establishments, and told them under legislation in the Alberta Liquor and Gaming Act, police could eject the gang members from their businesses. In fact, Tucker added patrons who are even wearing Hells Angels gear, or items related to another gang, can be ejected from bars by police.

This was a huge success and an example of how effective policing can be proactive at stopping problems before they happen. An once of prevention is indeed worth a pound of cure. This is exactly what Bob Deasy talked about in his book Being Uncle Charlie explaining how the Biker Enforcement Unit in Ontario was so effective at confronting the plague we face here in BC. This is the exact same department that Christy Clark and the BC Liberals has just cut funding for in BC.

The Calgary Sun ran an article with a picture of Calgary Hells Angel Kyle Kirkland aka Moose complaining about the whole thing. You will notice he's wearing a Mission city support shirt.

The Calgary chapter were found in possession of stolen cars from the Kelowna Hells Angels stolen car, boat and bike ring. The Calgary Hells Angels and associate Zenon Stepkowski were also involved with the Vernon Greeks.

Lester Jones was convicted of drug trafficking tied to three chapters of the Hells Angels. He was the former vice president of the Kelowna chapter drug trafficking in Winnipeg. The police agent bought two kilos of cocaine off Lester in Calgary and left $72,000 in cash for the drugs at the Calgary clubhouse.

In 2001 the Calgary police seized 11 kilograms of cocaine along with several firearms including a machine gun from the Calgary Hells Angels clubhouse. That's grounds to seize the clubhouse right there. Need we mention Kenny's ties to investment fraud and extortion? Nobody likes a liar. 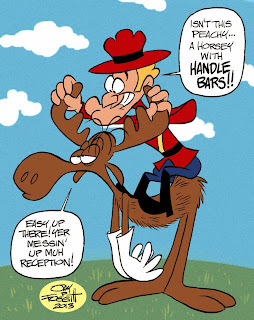 Update: Turns out Bullwinkle was complaining about the police kicking him out of local bars because of his criminal associations part of bar watch. It is the epitome of pathetic when bullies play the victim. Never mind kicking him out of the bar. Put his ass in jail for conspiracy to commit murder. The Calgary chapter sponsored the Vernon Greeks. That makes them legally liable for the murders they committed in their name. F*ck the Big Red Machine. Support Law and Order. Let's give it up for the Po Po. The Mounties always get their man. Or in this case, moose. 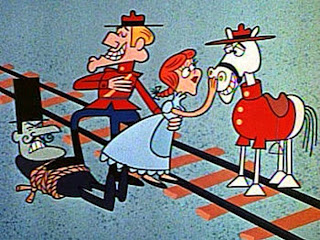 Update: I agree with Bar Watch. I don't think gang members should be able to wear gang colors in bars but they should be allowed in without colors. I also agree with the Aging Rebel in that the government does not have a right to seize any MC's patch and the whole obsession with asset forfeiture when no criminal convictions have been made is concerning for everyone. Freedom is under fire from the criminals and the government both. Buyer Beware.

The Failure of the Witness Protection Program