Weeding out the Globalists from the Conservative Party 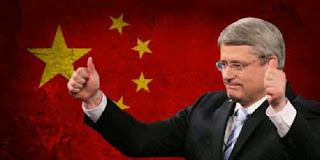 Before we unify the party we need to do a bit of weeding like Moses did when he came down from the mountain and saw everyone dancing naked around a golden calf. I'm going to use that allegory and compare it to Stephen Harper's love affair with Communist China.

Jim Karahalios recently posted a link to an old article from Macleans dated July 22nd 2011 entitled Playing footsie with Beijing. In that article it referenced how the president of the Conservative party was at that time in bed with Communist China. That was during the reign of Stephen Harper. The one who sold our oil rights to a communist dictatorship.

The article does raise valid concerns. Conservatives believe in civil liberty and human rights. Stephen Harper did not. That presented a problem for the party. The book Secret Empires by Peter Schweizer is an excellent road map for nonpartisan corruption in American Politics. The Democrats have lost it. They are so far left they have become Marxist.

Yet Corporate Communists like Mitt Romney and Mitch McConnell have infiltrated the Republicans as well. Globalists from both parties are trying to merge and create one party, the Communist Party of China. The same thing is happening in Canada.

Peter McKay was obviously from Stephen Harper's Corporate Communist clan of Globalists who say one thing and do another. These fake tax and spend Conservatives are what gave rise to the Reform Party. Instead of going that route again, I think it's time to confront the fake Conservatives within the party. Corporate Communists do not believe in small business and free markets. They believe in Corporate monopolies. They do not believe in fiscal responsibility either.

Erin O'Toole saw Peter McKay's dirty tricks first hand. He knows that Peter McKay's supporters did not vote for him, Derrick Sloan and Leslyn Lewis' supporters did. That means he needs to include them and their policies in his vision for the future of the party.

If Peter McKay had won the leadership race, we would all be looking to Maxime Bernier. He did not. That means we need to extend the hand of fellowship to Maxime Bernier and Jim Karahalios inviting them back. Yet I'm not sure they want it. They're pretty bitter. If Derrick Sloan joins them he will likely lose his seat in the next election just like Maxine Bernier did.

There are many things that Derrick Sloan and I agree on. The one flaw that Derrick Sloan, Maxime Bernie and Jim Karahalios share is their Muslim hate. Muslims are being bitterly persecuted by Communist China. They are our allies. Radical Islam is not a threat any more than White Supremacy is. We all see both groups as hillbilly extremists. Their fringe following is insignificant. Communist China's influence over the UN, the WHO and our country through lobbying and the Confucius Institute is a huge threat. That is what we need to address. We have no time to be side tracked with petty hate. Diversity makes us strong.

The Sharia law paranoia is a red herring. Imposing Sharia law would be a violation of the Canadian Charter of Rights. We believe in the freedom of religion. That is what we believe in.

Andrew Scheer stated "In our party we believe in the fundamental equality of all human beings. We don't play the identity politics game. We believe that every single human being has inherent worth and value. It was John Diefenbaker who brought forward the the Bill of Rights. It's Conservatives that believe that the government must be there for all people. We don't reward the rich and powerful the way the Liberals do. So our party has tremendous amount of grass roots support throughout every ethnic community in this country."

Maxime Bernie and Jim Karahalios' concerns about Peter McKay are completely justified. Erin O'Toole is a different person and can help fix the party if we let him. After speaking highly of Leslyn Lewis and Derrick Sloan, Rebel News had this to say about Erin O'Toole:

"Our job here at Rebel News remains the same; tell the other side of the story — the conservative side of the story. We’ll call it like we see it; we’ll be fair and hopeful. If O’Toole backslides, if he pulls a Patrick Brown, we’ll be here to let you know. But for now — as flawed as he is, Erin O’Toole is the best chance of beating Justin Trudeau in the next election. It’s our job to make sure that if he gets there, he gets there as a conservative." So mote it be.