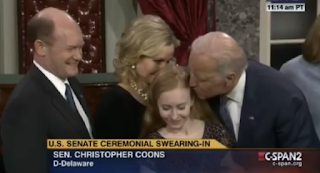 There is a disturbing video of Joe Biden interacting with a 13 year old girl going around. During the photo shoot of the swearing in of senator Christopher Coons, Joe Biden leans into Christopher's daughter Maggie and whispers something in her ear then tries to kiss her. He then says she's a good little girl and she says thank you.

The words in the transcript are almost impossible to believe but when you turn the volume up and look at the body language it does appear that is what he is saying. The bottom line is that 1) it is inappropriate and 2) it is creepy as f*ck. Now Joe Biden has a long history of getting too touchy and kissie with women. He even has sexual assault allegations which he denies.

Aside from being a compulsive liar, this guy is creepy as f*ck. If Maggie Coons doesn't think so I do. Kamala Harris should be running for president not Biden. John Brennan is a professional liar. 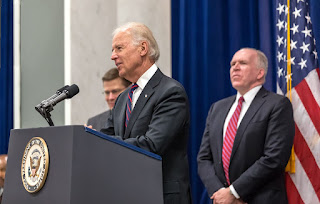 Posted by Dennis Watson at 7:19 AM