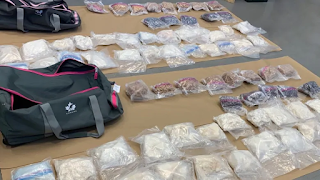 CBC is reporting that "2 men from Ontario were transporting 50 kg of ecstasy, 26 kg of substances mixed with fentanyl. Although police are still testing the substances, they believe there are 50 kilograms of MDMA - commonly known as ecstasy - and 26 kilograms of various substances laced with fentanyl, all packaged in one-kilogram quantities."

"The two men, aged 41 and 43, appeared in court for a bail hearing on Wednesday and were later remanded into custody until their next court appearance."

Last December, the RCMP seized 22 kilograms of crystal meth and 43 kilograms of cocaine in Winnipeg. Why does the RCMP make drug busts in every province except BC? If they spent more time making drug busts and less time running paid ads, we wouldn't need to replace them. 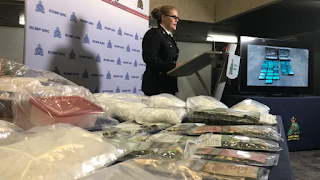 In Surrey, they're still watching the Hells Angels sell drugs out of Shakerz and no one gives a f*ck.