Surrey Police board proceeds to form a Municipal Force 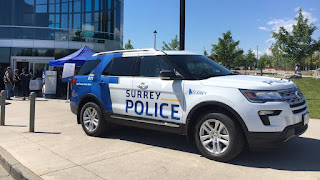 The Vancouver Province is reporting that "One of the fastest-growing cities in Canada is a step closer to having its own police force as Surrey, B.C., moves ahead with a controversial plan to replace the local RCMP detachment. At their inaugural meeting on Thursday, nine members of the new Surrey police board approved a motion to create the Surrey Police Service. It’s expected to launch the day after the city’s contract with the Mounties ends on March 31.

Board chairman and Mayor Doug McCallum, who was elected on the campaign promise to create the municipal force, said it represents more than a change in uniform. 'It is about local autonomy. It is about local accountability and it is about representing the diverse communities that we serve.' The B.C. government approved the switch in February and appointed the board in June to oversee the new force in Surrey, a city the mayor said is growing by 1,500 new residents each month." Surrey is the largest City in Canada without it's own police force. Indeed there is nothing controversial about the progress. The only thing controversial about it is the RCMP Union trying to prevent Surrey from progressing. It is long over due.