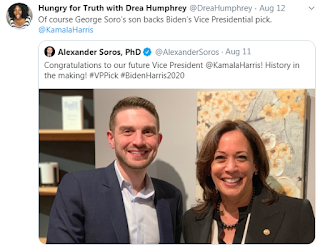 Joe Biden chose Kamala Harris as vice president for a political purpose. The Conservative Twins claim it was the worst possible choice. I disagree. I believe it was the best possible choice. Candace Owens is leading Black Exit from the Democrat party and the Hodge Twins are maintaining that momentum. The Hodge Twins claim that when Kamala Harris became senator, she was sworn in as the first female Senator of Indian descent. India not native American.

Wikipedia claims that Kamala Harris' mother was from India and her father was from Jamaica. Marie Clare claims that her parents divorced when Kamala was young, and she lived with her mom. Her name actually means lotus in Sanskrit. She is clearly a beautiful and intelligent woman.

Before becoming a senator, Kamala Harris was an accomplished lawyer who became the two term attorney general for the state of California. She's the one that should be running for president. Uncle Joe should be making her coffee. The problem is, Joe Biden is a bad man. Can a good VP make up for a bad president? No she cannot. Simply because a bitter tree cannot bring forth good fruit. If a bad man is elected president, a good vice president will not change him. They will simple become a spin doctor and rationalize his evil deeds.

The Daily Mail is reporting that "While the former President has publicly backed Biden - albeit late in the day - he is said to be warning his inner circle that he may not be fit for office. 'Don't underestimate Joe's ability to f**k things up,' Obama has cautioned, according to one Democrat who spoke to Politico." I guess that's what the Hodge Twins meant when they said Joe Biden didn't have Obama's support. Trouble in River City.

Drea Humphrey retweeted a tweet from George Soro’s son Alexander Soros, endorsing Kamala Harris for vice president. That is a colossal concern for world peace. The brother Drea interviewed expressed his concerns with the Soros. The Soros are driving the subversive Antifa Marxism that is attacking the American Constitution and the civil liberty it protects. Kamala Harris was emphatic on one point: that she would be loyal to Joe Biden and support his agenda without reservation. That is not a good thing. Joe Biden is a bad man and Kamala Harris can't save him.