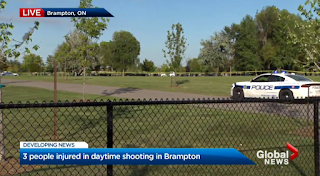 Global is reporting that "Three people have been injured — two critically — after shootings at a Brampton cemetery Monday afternoon, officials say. Peel Regional Police Const. Bancroft Wright said emergency crews were called to Brampton Funeral Home and Cemetery at the corner of Chinguacousy Road and Bovaird Drive West just before 3:45 p.m. with reports multiple shots were fired. “The gist of the call was that there were upwards of six or seven individuals who were shooting at each other,” he said.