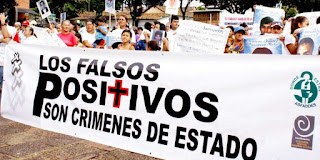 The Journal Pioneer is reporting that "U.S. Vice President Mike Pence on Friday called for former Colombian president Alvaro Uribe, who is under investigation for alleged witness tampering, to be released from house arrest. The Supreme Court placed Uribe, perhaps the South American country's most divisive politician, under detention in a unanimous decision last week that cited potential for obstruction of justice." He is acused of bribing witnesses in his false positive trial.

"Authorities say soldiers killed thousands of civilians between 1998 and 2014 under pressure from their commanders and then claimed the victims were members of the FARC guerrilla group. They planted weapons on their victims and dressed them in fighters’ uniforms in a scandal Colombians have dubbed Falsos Positivos, or False Positives.”

"Investigators found out that the military en masse was luring civilians to secluded areas, executed them, dressed them up as guerrillas and presented the body as a combat kill."

Once again Donald Trump is being conned by the CIA. In Honduras Donald Trump did the exact same thing Hilary Clinton did. They both endorsed a coup in support of Iran contra. Hilary supported a coup, Trump supported election fraud. This has nothing to do with left or right. This is about the CIA's drug traficking in Columbia. Iran Contra never stopped. That is what this is about.