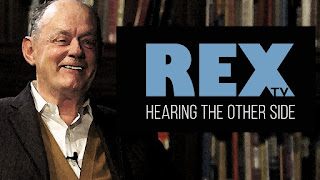 Speaking of how the main stream media mergers suck, there has been a new twist in the National Post's attack on Rebel News and the freedom of the press. July 28th it was reported that the National Post banned two reporters from Rebel News from the Alberta legislation press gallery. This was shocking for two reasons. The National Post used to be right wing. How can a newspaper ban a competitor from reporting on an event?

Rebel News explained that the National Post was bought out by Post Media News. That explains everything. Everything Post Media News touches turns to sh*t. As I explained, the National Post was created by Conrad Black who was a right wing media tycoon buying up all the newspapers in Canada. As I explained, that's the problem with media mergers. Once all the media outlets are owned by one entity, all you have to do is change the ownership then you change the direction of all the news outlets. It's the same with mercenary armies. Once you change the ownership you change the moral direction of the army. The clone wars have begun.

Rebel News is now explaining that "It’s bizarre that our right to send journalists to the Legislature depends on the permission of a snobby little club of obscure, left-wing reporters called the Alberta Legislature Press Gallery. But for reasons that no-one can remember, they’re in charge of granting security passes to the Legislature. And two weeks ago, they used that power to ban their main competitors." However, " five years ago when Postmedia bought out its competitors (so now they own both the Edmonton Journal and the Edmonton Sun; and both the Calgary Herald and the Calgary Sun), they made a legal promise not to engage in anti-competitive behaviour."

After Rebel News sued the National Post for breach of trust, they caved and pulled all their reporters from the Alberta legislature. It is, as Shelia Gunn Reid describes, sour grapes but it goes far beyond that. Revenue from the newspaper industry in Canada is continually decreasing. Post Media News has not been able to adapt to the digital presence so their one trick pony practice of buying up competitors and eliminating them is destroying their own industry.

The National Post wrote an article rightfully citing the Boyd report which states that "“Media organizations and individuals should not be denied accreditation strictly on the basis of their point of view. Whoever decides on issues of accreditation must also take the evolving realities of new media into account.” Yet that is exactly what the National Post did so their lawyers told them the case law convicts them. They go on to say "It’s a shame the Alberta Legislative Press Gallery then failed to take its conclusions to heart. Until it does, Postmedia will withdraw its reporters from the gallery, effective immediately." That is what doesn't make sense. They are the ones that broke the rule. As Shelia Gunn Reid said, the National Post is complaining about something they broke which feeds their credibility meltdown.

Post Media Trash refers to Rebel Media as "Ezra Levant’s obnoxious online news site, which has been home to a succession of cranks and bigots since its inception." That's not just sour grapes that's ridiculous. It is misrepresentation to the point of defamation. Let's compare that sinister snub with how they defamed a panel of American front line doctors who held a press conference in Washington. The National Post report on the event and twisted it right out of the Twilight Zone straight into the realms of intergalactic space. That kind of malicious misrepresentation destroys their credibility. No wonder their revenues continue to plummet.

It's interesting to note that while they defame Rebel and blame the press gallery for a problem they created, they throw in a sinister video about how teachers in Ontario are afraid to go back to work over the COVID fake news. Their perpetual propaganda has a purpose.

Posted by Dennis Watson at 6:45 AM