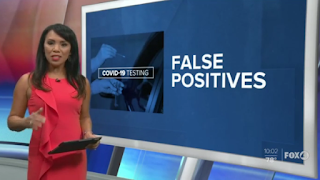 The Washington Times is reporting that "This coronavirus is a sneaky devil. So sneaky, in fact, that it can even infiltrate test kits of individuals who’ve not even submitted to being tested and then alert authorities to add these new positives, as they’re then deemed, to COVID-19 case counts. Sneaky. Hmm. Or not. Here’s a different notion: Maybe it’s the testing site administrators who are the sneaky devils. Either way, in Florida, something strange is happening with the coronavirus counts, that’s for sure. Local news reports that several individuals have tested positive for the coronavirus - despite never having taken the test."

ABC is reporting that "Governor DeSantis says he’s concerned about the accuracy of COVID-19 test results. In a news conference Monday, he said there have been several cases where people received positive results, even though they had never been tested in the first place. 'For that to come back positive, when there was no specimen submitted, is problematic. So I’ve heard it enough to be concerned about it,' said DeSantis."

WTSP is reporting that "Over the weekend, Florida made international headlines when it reported a shocking number of positive COVID-19 test results: More than 15,000 in a single day. But it turns out that report contained numbers gathered over several days by a single laboratory."

"More than 7,000 of the 15,000 positive cases reported have been traced to GENETWORx in Richmond, Virginia. The company, which is Florida’s fourth-largest processor of tests, said in a statement it looks like the Florida Department of Health reported in a single day, lab results that had been collected over the course of four to five days. That made Florida’s single-day caseload appear greater than it was."

USA Today is reporting that "The Florida Department of Health in its daily COVID-19 report lists multiple laboratories throughout the state – many of them small testing sites – with 100% positivity rates, but Southwest Florida's dominant hospital system said Wednesday it is incorrect to say 100% of their labs are positive."

"The Lee Health hospital system is reporting that its laboratory testing of potential COVID-19 cases has shown an overall positivity rate of about 18%, despite the state report showing that all people coming in for testing at some of its labs have the novel coronavirus. The Department of Health issued a statement to Florida media blaming the labs for incorrectly reporting data:"