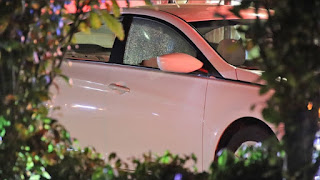 CTV is reporting that "Police in Maple Ridge are investigating a shooting that happened near the intersection of Selkirk Avenue and 223rd Street Saturday night around 10:30. A woman who lives in an apartment building just metres from where the shooting took place did not want to provide her name but showed CTV News what she says is a fresh bullet hole in the exterior wall just metres from her kitchen window." That's the thing these kids don''t realize. If you shoot so one and you mis you have to think about what' behind them that you might hit.

BC local news is reporting that "Local area residents reported a black SUV was seen speeding along Selkirk firing multiple shots at another vehicle."

Global Is reporting that "York Regional Police say one person is dead and another injured after a shooting in Vaughan. Police said shortly before 7:30 a.m. Sunday, officers were told about a male victim with gunshot wounds who went to a Toronto hospital. Officers said they learned the shooting occurred at a building on Freshway Drive, northwest of Keele Street and Steeles Avenue West. Police said when they went to the scene, they found a second victim - a 29-year-old man - who was dead. He has since been identified as Oshaine Channer of Peel Region."

Posted by Dennis Watson at 2:30 PM