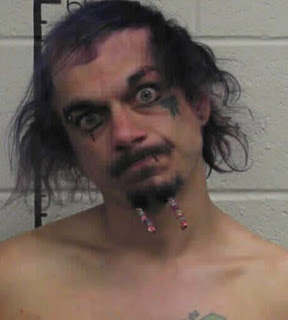 Wate dot com is reporting that "Brian Zielinski, an American member of the Hells Angels who goes by the name Jack Sparrow was arrested for burglary while dressed as a pirate. Me thinks he could use a drug test so he could. I guess the club isn't as well connected in the Sates as they are in Canada. Ya gotta love Captian Jack though.

The New York Daily News is reporting that "Zielinski was staying at a friend's house and started acting crazy when he was kicked out. The captain reportedly refused to leave the house and crawled back inside the building through a downstairs window. Once Zielinski was back inside the house, he allegedly became combative and Dunlap police said they were forced to tase him before arresting him." He must have mistook the residence for the Black Pearl.