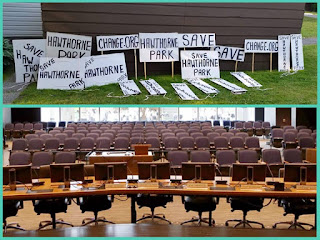 The Save Hawthorne Park Facebook Group shared this letter to Surrey Council from local resident Richard Landale: The article from Mayor Hepner is not only “Missed-Information” it conveys an inaccurate City Master Plan for Hawthorne Rotary Park.

The City gave three readings to Bylaw 19337 on July 24th to remove 6 reserved lots within Hawthorne Park, because under the Community Charter Chapter 26 section 86, the City can only remove reserved property from Parks by Referendum.

To ensure the City’s Master Plan succeeds, the City in its usual Herculean and Draconian manner, set the bar so high that to defeat the City’s Master Plan, some 30,372 Electors must file their objections by 4:00 pm September 22 2017, or by assent (acquiescence) the City can proceed with the Bylaw and their destructive plans for Hawthorne Rotary Park.

Further the Mayor does not mention the Master Plan encompasses the relocation of all the underground services along 104 Avenue through the Wetlands in Hawthorne Park, meaning the destruction of the Wetlands and the source of the Bon Accord Creek.

Further the Mayor does not mention the urgency to push their Master Plan forward, as the relocation of these underground services is because of the LRT between Guildford to Newton runs along 104 Avenue.

Further the Mayor does not mention the millions of dollars the Federal Government is offering to upgrade the Water Mains to the Whalley Reservoir Park (adjourning Hawthorne Park) as part of an overall GVRD Master Plan, these Federal dollars must “be spent” by December 31st 2017.

The Mayor did not discuss the Traffic Volumes projected to swamp the proposed 105 Avenue Connector as it passes through Hawthorne Rotary Park (they have not any volume projections).

The Mayor did not mention the increased Air Pollution these vehicles will impact Hawthorne Park and the immediate residents on the East and West sides of Hawthorne Park.

The Mayor did not mention this Master Plan is in direct conflict with the Official Community Plan Ecosystems and Biodiversity Policies, and the preservation of dedicated and reserved Parks.

I guess the Mayor forgot !