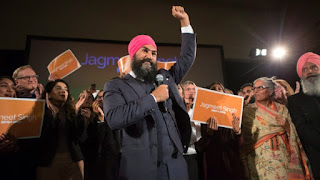 Well this is interesting. Rising star Jagmeet Singh won the leadership of the federal NDP on the first ballot. This is the guy who tactfully dealt with the racist heckler not by saying I'm not Muslim but by saying hate is wrong.

CBC is reporting that "Jagmeet Singh is the next leader of the federal New Democratic Party of Canada, taking more than the 50 per cent of the votes in the party's federal leadership contest. In total 65,782 votes were cast, with Singh taking 35,266 on the first ballot. The Ontario provincial politician beat northern Ontario MP Charlie Angus who won 12,705 votes, Manitoba MP Niki Ashton who won 11,374 votes and Quebec MP Guy Caron who won 6,164 votes to claim the federal NDP's top job."

Jagmeet received 35,000 votes and the next closest received 12,000. That is significant. CBC is also reporting that "When the membership sign-up deadline passed in mid-August, Singh's campaign quickly announced that they had signed-up more than 47,000 members, representing about 57 per cent of all new members signed-up in the course of the campaign and 38 per cent of the 124,000 members eligible to vote."

New members and a new face. Let's see where this goes. I don't know much about him but I like his style. I'm not sure if I'm in 100% agreement with his Old Age Pension reforms but I do think he is a good person. That's hard to find in politics.