Protecting the integrity of the Media 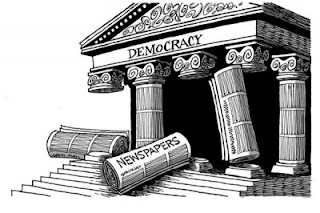 There was an interesting editorial in the Vancouver Province talking about the freedom of the press. It was criticizing the Trudeau government for not doing more to protect local media. It's kind of a catch 22. Everybody wants a free handout. It's not the government's responsibility to create jobs just create an environment where business can prosper. Likewise it's not the government's job to fund the media. Yet without funding the media is often doomed to the special interest of corporate advertising. All these corporate mergers has shown us how local media has become one great big clone show. When all the local media is owned by one entity, it becomes easier to control.

I agree the freedom of the press is a sacred principle. Postmedia news is reporting profits are up but at what cost? With one sweep of the pen they eliminated the Surrey Leader and all the jobs of those credible reporters. The Surrey Now Leader has become just another corporate spin doctor for insider trading and fiscal irresponsibility just like the Vancouver Province has. The Surrey Leader and the Vancouver Province used to be the last frontier for an alternative to corporate propaganda. Now they have merged with the others in the great big clone show spamming the public with nonsense. There is no freedom of the press in Western Canada. Corporate monopolies killed it. Yet I don't think it's the government's job to fix it.

The First Amendment of the US Constitution states that "Congress shall make no law respecting an establishment of religion, or prohibiting the free exercise thereof; or abridging the freedom of speech, or of the press; or the right of the people peaceably to assemble, and to petition the government for a redress of grievances." The government's only responsibility is to not make a law that restricts the freedom of the press. Preserving the integrity of the press is up to the free market and to supply and demand. If the media prints trash, the people won't read it.

Rebel media started off as an independent voice for Conservatives. It was great. I saw them at a Falun Gong demonstration. They were reporting on the atrocities of the Communist Government in China when no one else would. Then I read people trashing them so I had a look to see what was up. Seemingly they had a split over difference of opinion. The owner, Ezra Levant, started ranting about anti Semitism and extremism so co-founder Brian Lilley left as well as several others. Fair enough but there's nothing stopping Brian Lilley or anyone else from starting up their own outlet that is more balanced. Supply and demand yo. We know there is a demand for it. All we need is a like minded capitalist to fill the void. I use the term capitalist tongue and cheek.

I'm not talking about corporate monopolies. That's Communism. I'm talking about small business and free enterprise which is the backbone of the free market. We need a Ron Paul not a Richard Spence. We need a Preston Manning not a Brian Mulroney. When the Reform party merged with the very entity they were created to correct, the dream died. Yet there is nothing stopping anyone from picking up the torch and fulfilling the dream. That is the reality of the free market.

However, the CBC is independent and still does investigative journalism.