Curtis Sliwa in the News 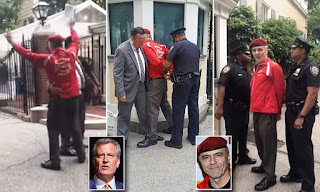 Speaking of Curtis Sliwa, I see that he is in the news again. Catching up on some of the other recent news about Curtis has been quite shocking indeed. I think it would be prudent to address the matter before the trolls do.

"Sliwa, 63, appeared at Gracie Mansion on East End Ave. near E. 88th St. at about 8:25 a.m. to serve de Blasio with a lawsuit aimed at getting him off the Working Families Party line and ended up in handcuffs just after 8 a.m. Sliwa’s girlfriend Nancy Regula, 35, said the complaint had to be personally served on the mayor. The lawsuit also targets Public Advocate Letitia James and city Controller Scott Stringer."

For those of us who know Curtis, there is nothing surprising in any of that. Like I said, if you think I'm crazy wait until you meet Curtis. Curtis posted a video of the arrest and refers to himself as the Reform Party Chairman. Now that is interesting. The previous news reports are a bit shocking and require comment for clarification.

The other news reports refer to Mary Sliwa as his ex. That's news to me. I am sorry to hear about the breakdown of that relationship. I never met Mary and I will never trash the mother of his children. I kind of related better to Lisa than Mary. Lisa was a front line street soldier. Mary was an ivory tower businesswoman. Mary did great things financially for the group. She organized galas with the Mayor that raised a lot of money. Evidently times have changed.

We've come full circle. The Rock is back in the hood fighting with the Mayor just like back in the day with former Mayor Ed Koch. Now that's what I'm talking about. It just might be worth another trip out to the Big Apple. I'm sorry to hear abut Fran's passing. She was a wonderful person.

One time Curtis said Mary implied that I was stupid. In all fairness, given the context of the situation she did have a point. Curts came to Vancouver 10 years ago and asked me to come out of retirement to help David Toner restart a chapter of the Guardian Angels in Vancouver. I agreed. I didn't want to do it all myself and was more than willing to help David because he was competent and genuine.

I ended up getting involved in helping a few friends from Telus fight the offshore call centres in their labour dispute. The Union became very political and divided. I took the members on the front line's side. One crazed troll from the Union that sued the members started stalking me.

Curtis called me up one day in a frenzy ranting about her. I shrugged it off and said just ignore her, she's crazy. He agreed but said she went to the National website and is phoning up every chapter leader in the world slandering me. Evidently she was upset when I got fed up with her and told her to f off and get a life. Curtis was livid. He didn't want to have to waste any more time doing damage control talking about it with every chapter leader in the world. I understood his concerns. I did not realize she was doing that. Curtis said the woman was obviously crazy and told me not to even speak with her. He claimed Mary said what is he stupid? Evidently I was.

The other news about Curtis' divorce gets bat sh*t crazy. Everyone says their ex is a liar. The New York Post reported that the court threw out Mary's million dollar law suit against Curtis back in 2014. I am indeed sorry to hear it has come to that. I am gong to step in as the Canadian negotiator and say can't we all just get along?

I knew Curtis 30 years ago. Back then we were rocking the world doing what others said could not be done. I haven't always agreed with everything Curtis has said and done but I have always known Curtis was sincere and genuine as he has with me.

Last year the New York Post reported that Curtis planned to run against the woman he moved in with after his divorce from Mary when that relationship also broke down. Curtis was likely joking about that. I don't see Curtis running for anything that has to do with the Democratic Party.

In 2015 the New York Daily News reported that "Curtis Sliwa has been suspended indefinitely from his gig on NY1 after his lewd rants about City Council Speaker Melissa Mark-Viverito. The outspoken Guardian Angels leader said “I’m your papi” in reference to Mark-Viverito on the NY1 show last week. After she slammed him on Twitter, he doubled down with a barrage of sexual comments, saying he thought about having sex with her and finds her extraordinarily hot.”

Although that is certainly not something I would say, I think we need to put the comments in perspective to fully understand them. Without trying to be disrespectful, if you take a look at her picture, Curtis was obviously being sarcastic.

Curtis is very outspoken and controversial. I do not believe Curtis hates women. I think Curtis hates having to walk on eggshells when debating anything. Curtis doesn't hold back. He always says it like it is. With all this Harvey Wallbanger news some feel we are becoming a bit over sensitive when it comes to political correctness.

I am not going to minimize the multitude of allegations against Harvey Weinstein. Rape is heinous. I do think that some of those woman hopped into bed with him to advance their careers. Likely many were exploited. That is clearly wrong and is a matter before the courts. Personally, I believe in respectful communication. I believe women should be cherished not belittled or degraded. Yet sometimes we do get carried away with obsessing over political correctness.

Curtis Sliwa is cut from a different cloth and although some of his recent statements make us wonder if he has lost his mind, I will simply point out that there is always a method to his madness. As controversial as he is, he means well and has done things others said could not be done. I'm not a cat guy myself but whatever turns your crank yo. Peace.

You can listen to Curtis'radio show online at 77WABC.