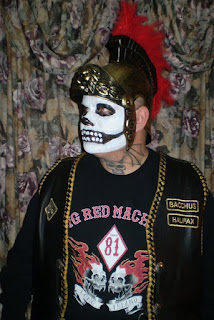 The Guardian is reporting that Bacchus, a Hells Angles puppet club has set up shop in PEI. No doubt, local law enforcement is concerned. RCMP Cpl. Andy Cook asks local residents if they want to support organized crime.

"There are other motorcycle clubs in Charlottetown and Summerside, but they don’t wear the one per cent patch that self-identify them as motorcycle gangs. Cook said so far there haven’t been any problems between the groups in P.E.I. 'Historically, here in P.E.I. everybody’s gotten along,' he said. That’s something Cook worries could change with a Hells Angels presence in the province. “The Hells Angels it’s a well documented history of them being a violent group,” Cook said. He also said the Angels have a history of drug trafficking and extortion, leading the courts to declare them a criminal organization. 'That’s the baggage the Hells Angels bring with them wherever they go,' he said." True enough. Bacchus as well.

Bacchus has a history of drug trafficking, bullying and murder whilst under the Hells Angels banner. The persona and the reality are two very different things. Many argue the persona is a mockery to justify plausible deniability when it comes to organized crime.

George Wethern, former Vice-President of the Oakland Chapter said "The Oakland Angels began issuing new charters and assisting chapters set up their own drug operations. The additions were designed to contribute to our image and business concerns, by providing a drug route link, manufacturing a drug, supplying chemicals, or distributing drugs in an untapped area."

Sorry to break it to ya guys but your clown up top is dressed as a Roman soldier not a Greek god. Same with the logo that has a condom on its nose. That means their logo is of the Bacchus who was a Roman soldier that was openly gay and secretly Christian not the Greek god. Not that there's anything wrong with that. Just sayin. Warm brothers in the hood yo. 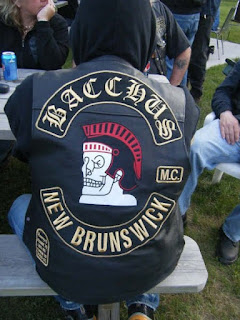