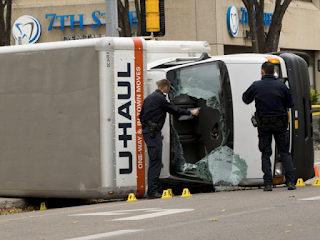 With regards to the recent Edmonton "attack" that has been completely overshadowed by the Las Vegas shooting I'm going to point out one simple odd coincidence. I have a source that claims higher up RCMP and 911 dispatch workers from all over were having conferences at the Coast plaza hotel in Edmonton while this "terrorist attack" occurred. The hotel was front and center to the whole 3 block quarantine area the attack occurred in.

I've already mentioned how the timing of this attack is somewhat suspicious given the fact that after Bob Paulson's exit interview, it looked like all the RCMP officers that were taken off organized crime might finally be put back where they belong. I've also mentioned how terrorist attacks without motive are also suspicious. Every crime has a motive.

Another odd coincidence is the fact that Edmonton was prepared for a terrorist attack and was on high alert. Who tipped them off? The confidentiality agreement everyone who participated in the RCMP / 911 dispatch seminar signed is also suspicious.

The National Post is reporting that "It’s entirely possible that Edmonton could have been the victim of the worst Canadian terrorist attack since the 1985 Air India bombing. On a night with crowds packing sidewalks to enjoy one of the last snow-free evenings of the year, a man got behind the wheel of a U-Haul with an intent to kill as many of them as possible. Instead, due exclusively to the efforts of Edmonton Police, he killed none. 'They did a terrific job, and as good as anywhere,'” said Chris Phillips, a British counterterrorism expert and consultant."

Comparing this unarmed lone wolf to the Air India bombing is somewhat extreme. It almost sounds like a PR event to get more funding before their billion dollar a year budget gets cut. Since they did mention Air India we need to reiterate that CSIS were the ones that provided the explosives for that heinous event and had an asset on the field that helped plan that attack.

Chris Phillips, a British counterterrorism expert and consultant said the Edmonton Police did a great job. Just who is Chris Phillips? He is a former cop from England who runs a terrorist training consultation firm that participated in Project Angus which was a three hour multimedia simulation to help various agencies learn how to deal with terrorist threats. The next question we need to ask is, was this staged attack in Edmonton a training simulation like project Argus? Please advise. Follow the money yo.

Posted by Dennis Watson at 8:43 AM