Pimpin for the HAs 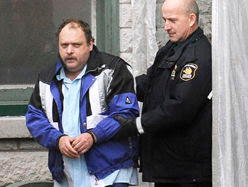 Speaking of the Hells Angels involvement in the sex trade, in 2009 TVA Nouvelles reported that Martin Émond was arested in a prostition ring that had been running for a decade in Quebec.

In 2009 TVA Nouvelles reported that Martin Émond, 49, from Quebec, who has quietly ran a prostitution network protected by the Hell's Angels for 10 years, was sentenced to eight years imprisonment. The guy doesn't look much like a member of the Hells Angels. He actually looks kinda creepy. It's hard to imagine any service provider would want to work for him.

It brings us back to BC and the Dianne Rock story. We know that the BC Hells Angels used violence to take over and maintain exclusive control of the exotic dance industry here. We also know the Hells Angels have a long history of being involved with the sex trade.

In 2014 the CBC reported that a woman who "spent four years working in the sex trade before running away. She said she was forced into prostitution by a Hells Angels gang member, and said she was too scared to report the man to police." She was afraid they would harm her family.

Dianne Rock had been off drugs for a long time until her "boyfriend" a longshoreman named Vince McMurchy who sold drugs on the side got her addicted to crack. She was eventually forced into prostitution to pay for the drug near the end of her life just like Janice Shore was. When they could no longer pay their drug debts, they were both killed.

Annette Allan worked outside the Front Room. She was murdered at the Surrey House of Horrors and was dumped in the Fraser River. Teri-Lyn Williams was another sex trade worker in Surrey that was found dead outside Tbarz in 2010.

Shannon Collins who was murdered in Edmonton. Her sister was told she was leaving for Calgary to work for the Hells Angels. However, since she was living what police described as a high risk lifestyle, it appears she had already been working for the boys in Edmonton. Georgina Papin was also originally from Edmonton. Her DNA ended up on the Pickton farm.

Can we see the pattern yet? Forcing women with additions into the sex trade then killing them when they can no longer pay their drug debts. It doesn't get any more sinister than that.

The Prostitution Pipeline in Canada