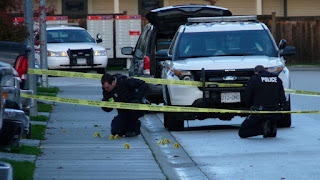 The Langley Times is reporting that "Police were called to the scene of a reported shooting in a quiet neighbourhood of new houses near 211 Street and 79A Avenue in Langley early Sunday morning just before 4 a.m. RCMP could be observed in front of a taped-off front yard taking photos of what appeared to be shell casing markers. According to one online comment the shooting caused property damage but no injuries."